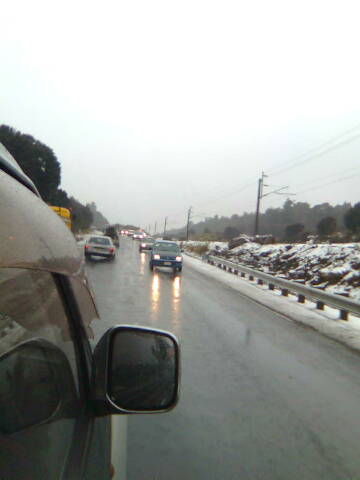 Parts of Canterbury are continuing to be hammered by heavy snow today as the full brunt of the southerly has kicked into gear.

Power outages have been reported from the Huruni District in North Canterbury and also West Melton about 15km west of Christchurch.Unconfirmed reports are coming in of the weight of snow on powerlines causing the power outages.

Christchurch is seeing the snow tumbling down in many areas with reports of 10cm in the central city and up to 15-20cm by the airport.Some eastern suburbs are seeing a mix of rain and snow.

An easing is expected this afternoon across Christchurch and clearing this evening.

Roads are marginal in inland areas with some impassable including the alpine passes.

Christchurch roads are open but drivers are advised to stay off roads unless the trip is necessary.

Temperatures are bitterly cold which is expected given the conditions and it’s been near the freezing mark for most of the morning. There is a chance temperatures could drop futher this afternoon however the overhead situation should slowly improve.

Meantime West Coasters have seen very heavy rain with some flooding in places and also reports of sleet have been coming in.

Further south and Dunedin has had an icy morning as have parts of Southland.

WeatherWatch will bring you the latest information as it comes to hand.

Hi! Its been snowing continously in Parklands we have 9cm of snow settled. Its still snowing!

Gee what a good job it would be to work for the metservice.get it completely wrong and still have a job.
Forecast for palmerston north and manawatu 17 degress scattered rain northerly,instead its 7 degrees raining heavily and strong cold gusty southeasterlies.they finally updated this after 2 hours of this weather.any thoughts Phil how they could get so wrong?

Id say it was bang on!

weather cleared this evening as predicted

Thanks Phil forecast was spot on – we stayed home this morning and didnt regret it!

8cm in Halswell, Christchurch and rising.