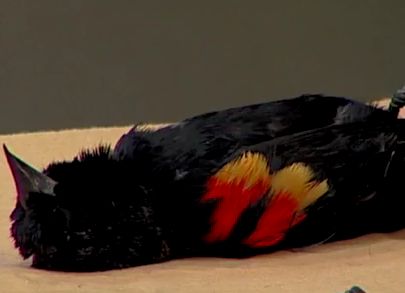 CNN — The thousands of birds that fell from the sky just before midnight New Year’s Eve in Arkansas likely died from massive trauma, according to a preliminary report released Monday.

The birds — most of which were dead when they were found — were red-winged blackbirds and starlings, and they were found within a one-mile area of Beebe, about 40 miles northeast of Little Rock, the Arkansas Game and Fish Commission said.

Viewer Advisory:  The video above may contain scenes that are considered graphic by some – showing autopsies on birds.  WeatherWatch.co.nz

Keith Stephens, a spokesman for the commission, said the birds showed evidence of trauma in the breast tissue, with blood clots in the body cavity and a lot of internal bleeding. All major organs were normal.

He cited a preliminary report conducted by the Arkansas Livestock and Poultry Commission.

“Further tests will be done to rule out other causes, but the birds suffered from acute physical trauma leading to internal hemorrhage and death. There was no sign of any chronic or infectious disease,” the report said, according to the game and fish commission.

Karen Rowe, an ornithologist for the game and fish commission, said the incident is not that unusual and is often caused by a lightning strike or high-altitude hail.

A strong storm system moved through the state earlier in the day Friday. Officials also speculated that fireworks shot by New Year’s revelers in the area might have caused severe stress in the birds.

“It’s completely indescribable how many birds were here. I’ve never been anything like it,” said Melissa Weatherly, a Beebe resident.

Blackbirds do not normally fly at night and it was not immediately clear what caused the odd behavior. Loud noises were reported shortly before the birds began falling, according to the game and fish commission.

“The birds obviously hit something very hard and had hemorrhages,” said Rowe.

“Initial examinations of a few of the dead birds showed trauma. Whether or not this trauma was from the force of hitting the ground when they fell or from something that contacted them in the air, we don’t know,” she said.

USAtoday report that the deaths were caused by loud noises, but I guess we may never know exactly how they died perhaps.

“A mysterious event that caused thousands of red-wing blackbirds to rain down from the sky New Year’s Eve in the Arkansas town of Beebe most likely occurred when loud noises and fireworks frightened a flock that roosts in a neighborhood, causing them to die when they flew into buildings and other obstacles, a state ornithologist said.”