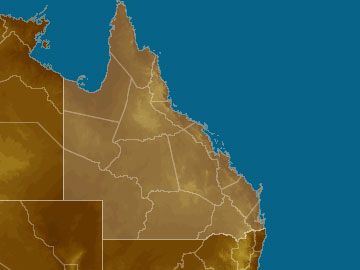 Gale to storm force winds and heavy showers have continued along coastal southeast QLD with reports of beach erosion and with an increasing swell that is expected to peak at 4-5 metres during the next 24 hours.

The heaviest rain has been forming near a trough along the QLD coast. The higher rainfall totals have been from Bundaberg south to Lismore in NSW with widespread 25-50mm. The highest totals have been near the Gold Coast with Coolangatta reporting 116mm over the last three days, more than doubling their normal August rainfall. Upper Springbrook in the Hinterland has seen 72mm to 9am this morning and in the past three days reporting more than 125mm.

The strong winds are being caused by a tightening of the pressure gradient from a large high to the south and a deep trough of low pressure in the Coral Sea. Winds have been clocked to 118km/h at Moreton Bay and Double Island Point reported 107km/h, both last evening. The highest wind around the Gold Coast was 93 km/h at the Seaway.

The trough will slowly edge west and inland reducing some rain for coastal areas but giving interior areas of northern NSW and southern QLD some much needed rain by late in the week.