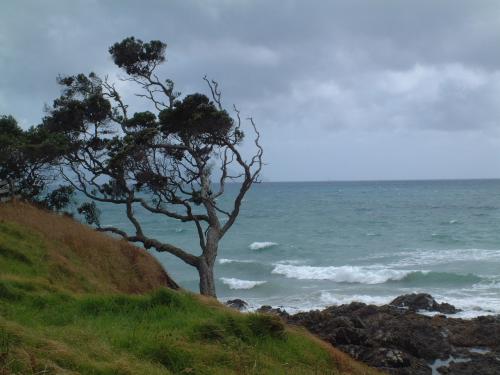 The low, which will have a central air pressure of just 987hPa by Saturday morning, should lie near East Cape during Sunday.

MetService agrees, raising their confidence of rain and wind warnings for Gisborne, Hawkes Bay, eastern Bay of Plenty and Taupo from low to “moderate”.

WeatherWatch.co.nz says the centre of the low is expected to clip or move very near East Cape and could bring rain heavy enough to cause some flooding and winds strong enough to cause minor to moderate damage.

Due to the lows deep centre the strong winds wrapped around it are likely to generate large seas possibly as far north as Northland and certainly across East Cape, Gisborne and Hawkes Bay from Sunday onwards.

The low should generate more rain for Northland and Auckland – both regions are incredibly dry as the summer weather continues in to March.

However the past computer model runs now put the low further east of these two regions, resulting in a lower chance of rain on Sunday and Monday.  WeatherWatch.co.nz says the computer models are a little at odds as to the storms exact path and it’s one to watch closely.

WeatherWatch.co.nz says no severe weather is expected for Northland and Auckland.

Adding to the strong winds a large high over the South Island will push against the low creating a squeeze zone of air pressure.  The high will bring calm weather to the South Island.

Wind directions for northern centres will be mainly southerly, with the low east of New Zealand.   Those in the east should see more of an east to south east flow.

Excellent topics, I like this. I found this online that, Visit Te Aroha to experience their naturally hot soda spas and warm leisure pools set among the green tree ferns of Mt Te Aroha.You will get accommodation, local history, news and events and all other information’s here.

Hi, You mention ‘The low should generate more rain for Northland and Auckland – both regions are incredibly dry as the summer weather continues in to March.’

Has it occurred to anyone that the reason it has been dry in the North of New Zealand is because weather modification technology is being used? Aerosol operations have been seen occurring in the region.
Please refer: http://chemtrailsnorthnz.wordpress.com/

Any Idea wat the weather would look like this monday for the crossing.Keeping my fingers crossed that the low goes further east tomorrow..

The forecast at this stage says it could be fairly windy with the chance of rain.  This low is proving very difficult to forecast… hopefully it’s going to shift further east – as you want – to bring better weather on Monday.

Hi Phill,
Are the winds going to effect Te Aroha. Or is it going to far enough to the east.

The winds will be from the south easterly quadrant which doesn’t affect the western Kaimais as much.  Think it’ll be blustery at times but not wind warning criteria at this stage.

Just at the start of a week i have taken off to go hiking. It sorta works like rain on public holidays, almost guaranteed!

Any idea how things will look in Taranaki over the next few days? Or do we give up and visit wineries instead?

Looks like it could be fairly windy – sou’easters especially strong on Sunday and Monday.  Rainwise, doesn’t look too bad for western areas like Taranaki.