Still mainly settled and dry this coming week, but a few showers for some 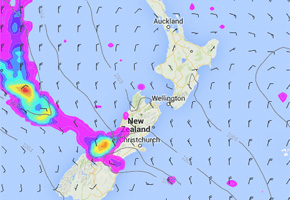 This coming week is still mainly dry for the most part but there are a few weak changes moving in which will bring cloud and a few showers to some regions, an isolated heavy inland shower for the North Island is possible too. So lets have a look at the rundown of how things are looking, mainly focusing on rain.

Monday has a high in the Tasman Sea with a southwesterly airflow lying over New Zealand, the North Island is mainly dry however in the west expect periods of cloud and the chance of a brief shower at times. The South Island has a frontal system lying over it and it does give some rain, mainly to the South Islandâ€™s West Coast but there will be a few showers about for much of Canterbury also which mostly clear into the afternoon. Southerlies move into Wellington in the afternoon, there could be some drizzle there overnight.

Tuesday continues to see a high in the Tasman Sea, winds for all regions are looking to be onshore mostly flowing perpendicular to coastal areas. Expect morning cloud for most then breaking to afternoon sunny spells. For the ranges of Hawkes Bay, Gisborne, also the Bay Of Plenty and perhaps Central North Island and Waikato isolated showers develop in the afternoon some of which may become heavy with thunderstorms then clearing later in the evening. Showers of this nature tend to be isolated so it may be hit and miss if your area receives anything. Later in the evening southerlies push into the South Islandâ€™s east coast bringing cloud and the chance of overnight drizzle.

On Thursday a ridge lies over the North Island while northwesterlies build for the South Island, a mainly settled day with dry conditions prevailing. While itâ€™s a northwesterly airflow that builds over the South Island the east coast is likely to see gusty east to northeasterly winds. Inland parts of the North Island could see showers late afternoon / evening, they will be mainly isolated in nature so only affecting small areas at a time.

Friday is dry again for most of the North Island, chance of an isolated shower afternoon / evening about Northland however which could be briefly heavy. Over the South Island a moist northerly airflow pushes some rain on the West Coast, some of this rain may spill eastwards into Otago / Canterbury but at this stage itâ€™s mainly in the form of a few brief spells / spots.

Looking ahead Sunday may bring some rain a little more widespread in nature for the South Island so something to keep an eye on. The North Island looks mainly dry next weekend.