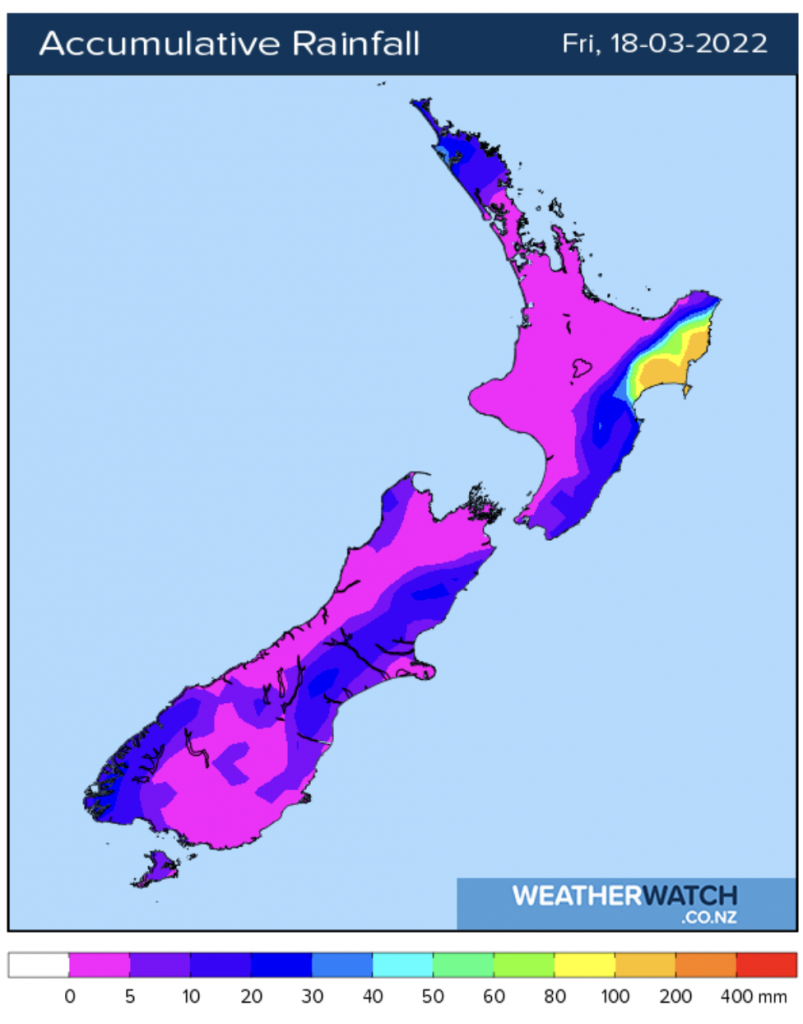 Updated 12Noon Sunday: Rain is still possible for the eastern North Island this week with heavy falls – but as we said on Friday there is also the chance a powerful incoming high will push more of this rain offshore.

Latest data this Sunday still shows a low moving in from NZ’s east to lie near East Cape this week. Rainfall totals have backed down since Friday’s update, but still shows the eastern side of the North Island exposed to rain with over 100mm possible in the days ahead. On Friday it was showing some places may receive over 200mm. The shift in totals is due to the fine line between the heavy eastern rain and the very dry high coming in.

The incoming high from Tasmania will be very powerful for this time of the year – it will be a tug of war between this incoming high to the south west and the incoming low from the east as to where precisely the rain reaches.

Northern Hawke’s Bay, Gisborne and East Cape look most exposed to heavier rain than Wairarapa does but the totals in the north look positive rather than negative at this stage (ie, flooding risks have reduced, so rain will be more helpful).

The set up is a little similar to that of Cyclone Cody earlier this year. The rain making low moved in very close, but at the last moment high pressure from south of NZ ballooned out and helped nudge Cody’s wind (and much of the rain) offshore. That has the potential of happening here, it’s again a close call.

To make sense of the latest totals for you, please see the daily and hourly rainfall totals via WeatherWatch.co.nz and RuralWeather.co.nz. These forecasts take all models into consideration.

We’ll have more details in our Monday weather video as we track this possible rainmaker, but also other rainmakers for the rest of March now that many regions are still very dry.