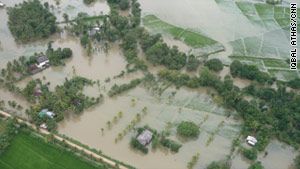 The displaced have been housed in 505 welfare centers and relief efforts are under way, said Pradeen Kodippili, assistant director of the Colombo-based Disaster Management Center.

“We have confirmed there are seven deaths,” Kodippili said. “Five navy personnel who were deployed on relief work are also reported missing.”

The worst hit areas were the districts of Anuradhapura and Polonnaruwa in the North Central province, said Maj. Gen. Boniface Perera, a Sri Lankan army commander.

The eastern districts of Trincomalee, Batticaloa and Ampara are also affected.

Prisons flooded in Anuradhapura, and inmates had to be moved to three different prisons.

In the Polonnaruwa district, the town of Medirigirya was fully submerged in water Saturday. Perera said army search-

The intensity of the raging flood waters was illustrated by an incident Thursday night.

Perera said his headquarters received a distress call that a group of villagers were marooned on a patch of land and that rising waters would swallow them within hours. Two boats were sent for their rescue at midnight Thursday. When one boat with the 17 villagers came within 50 meters (55 yards) away from their berthing point, gushing waters lifted the boat and smashed it on a culvert.

The boat broke into three pieces, leaving at least five people — a navy sailor, a 6-year-old child, an 8-year-old child, a man and woman — dead. Others who were swept away clung to trees and were rescued by the second boat. Troops used flashlights in the heavy downpour to locate them, Perera said.

From Iqbal Athas, For CNN