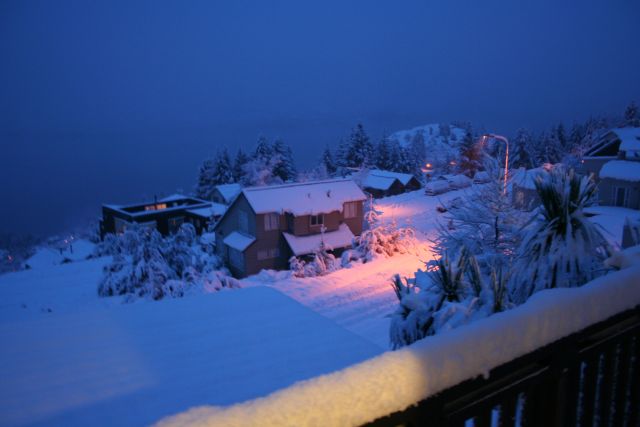 Updated 9:26am — It’s been with us for several days now but finally the spring storm that brought gales, hail, thunderstorms, snow, temperatures into the mid 20s and then a biting wind chill, is now finally easing.

Overnight hail fell in all of the main centres at the same time – something WeatherWatch.co.nz doesn’t happen too often.

There were also reports of snow pellets, also known as graupel, that fell on the Waitakere Ranges briefly overnight in Auckland.

Snow fell in Stratford, Taranaki, despite the area only being considered low risk for snow – as the coldest of the air moved through overnight.  However the system lacked the moisture to really deliver a blanket of snow across lower altitude areas of both islands.

The southerly blast was only the end of the system that started at the end of last week piling warm nor’westers onto the nation and prompting highs into 20s.  Those winds then reached hurricane force around Wellington.

The weekend was a windy one then it became very wet.

By the start of this week the cold change was about to hit, but while the air was “significantly cold” the snow itself was not what we would call a “significant event”.

Showers continue to affect Christchurch and Banks Peninsula and up to Kaikoura this morning, with cold conditions in Wellington too and some showers with hail around the lower North Island.  Sleet is still being reported in Masterton too.

However most other showers are now lying out at sea, running parallel to our coastlines but missing many main centres.

Meanwhile conditions clear in the west as winds turning southerly.

Growers and orchardists are now advised to be prepared for frosts tonight and tomorrow – some may be heavy in the Deep South.

WeatherWatch.co.nz says motorists in the Deep South should also be aware that black ice may affect some roads and highways on Thursday morning.

The weather system was considered by WeatherWatch.co.nz to be a classic spring storm and not a sign that winter weather is returning.

So when is the next one due?