Spring may be stormy this year: El Nino 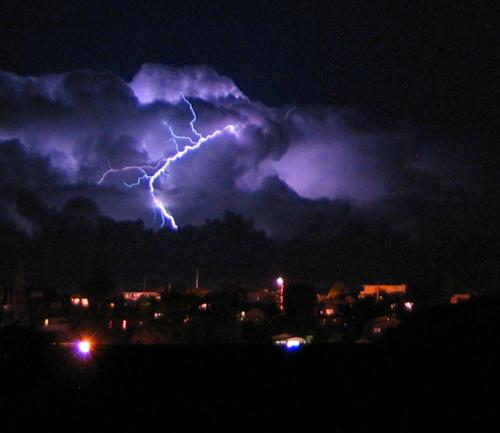 Weather experts are promising an “exciting” spring, complete with thunderstorms – and possibly tornadoes.

Weatherwatch analyst Phil Duncan said that after a cooler than average winter an El Nino pattern could bring storms between September and November.

“Last year we were heading into a La Nina weather pattern, which favoured more easterlies and subtropical lows,” Duncan said.

“We never got those lows and instead the country went dry and quiet. I think this spring may be a little more exciting than last spring.”

An El Nino pattern tends to bring New Zealand stronger or more frequent winds from the west in summer, typically leading to drought in east coast areas and more rain in the west.

During the transition there may be an increase in stormy weather in western areas, including Auckland, Northland and between the West Coast and Taranaki. “This could mean more thunder storms than last year and perhaps more isolated tornadoes,” Duncan said.

MetService weather ambassador Bob McDavitt said the El Nino pattern was dominating the tropical Pacific Ocean and there was little sign of it in New Zealand – so far.

“However, we are likely to see more El Nino-like weather during spring. This means we could have a windy spring, with many fronts rolling in from the Tasman Sea followed by west to southwest winds.”

McDavitt said the places west and around the country’s divide – the Southern Alps in the south and Tararua, Kaimanawa, Kaweka and Urewera Ranges in the north – may see more rain.

Areas to the east of the divide would be drier. “Several of the cold fronts are likely to be thundery and squally, especially around our mountains.” Despite the cold fronts, Duncan predicted that Canterbury, Marlborough, Hawkes Bay and the Bay of Plenty would get the best spring weather.

That’s welcome news to Cantabrian Kristy Schouten, who lives about 35km from Christchurch, the coldest and driest part of the country last month. Auckland was the sunniest and Tauranga the wettest.

Canterbury was the coldest in May and June. Hanmer Forest bottomed out at -7C in May, with Hanmer Springs plummeting to -8.9C in June. Schouten said winter in Canterbury had been colder than usual with “harsh frosts”.

“I certainly don’t remember having this many layers on last year. If it’s an overcast day the frost doesn’t clear until midday. It’s horrible.”

Schouten said last spring was a “disaster. It would be a welcome surprise if spring was to be nice and fine.”

Cool, would enjoy a few good boomers. Saw some amazing lightning in the Sunshine Coast of Australia last November and am returning to the Gold Coast this November. Am I likely to see a repeat of last year’s light show? Does this weather pattern affect them similarly?

During El Nino the highs are usually in the Tasman Sea which could mean the air is dry over Queensland.  It all depends on where the highs sit, but it probably means drier conditions for the east of Australia.

Anyone who lived in the west who remembers 1982-83 the last big El nino,can remember summer missed them that year.

Great to here were going to have more storms, afterall thats what weather is all about, and thats what us weather nuts enjoy

I’m so relieved that spring is on the way and that it’s gonna be a good one for us here in Canterbury. Not sure I can take much more of winter now?

Cool little graphic but definitely needed to include the insane hail in Tauranga earlier this year.

Good.
I can’t wait. About time we get some storms.