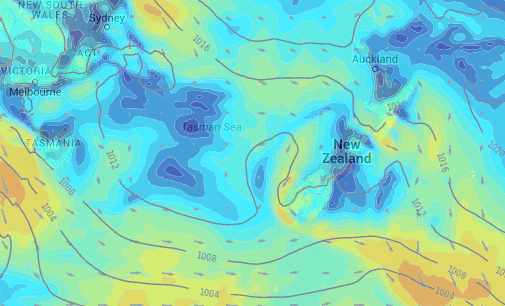 With only one week of spring left (officially), we might expect things to start looking summer-y pretty soon…but it is looking like a slow transition, with the unsettled weather looking like sticking around until after the weekend at least!
A north/northwesterly airflow will strengthen tomorrow across the whole country, meaning mostly cloudy skies in the west but clear in the east.

There may be a few drizzle patches in the west of the North Island, but sunny spells will lengthen during the afternoon – even though the cloud will stick around.
Westerlies over the North Island won’t strengthen until evening, though, so it will stay relatively calm until Wednesday, when those westerlies will pick up strength.

Sunny areas and high cloud are in store for the east of the North Island, and northeasterly winds will freshen from the northwest about the Wairarapa in the evening.
Cloudy areas persist about Wellington with northerly winds, strengthening from afternoon, and a risk of gales from evening, especially for Cook Strait and coastal areas.

Thick high cloud for Nelson and the east of the South Island, with north to northeasterly winds freshening during the day.
Cloudy for the West of the South Island as in the north, with the northwesterly winds strengthening during the day, drizzle patches moving in from around midday then turning to rain about South Westland by evening.
Rain will spread north later in the evening, and could be heavy at times.