Spring ends – and summer starts – on a windy note 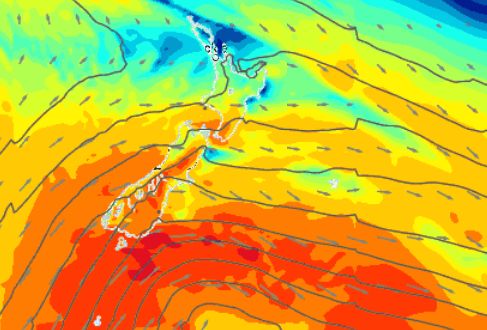 A blast of westerly wind is going to see spring end on a windy note – and summer to start cooler than some regions were this week.

WeatherWatch.co.nz says a west to south west flow will spread across the nation behind this weeks sub-tropical low.

“The humidex temperature in Auckland was 32 degrees on Wednesday. By this weekend the air temperature may only be down a couple degrees but it may feel several degrees cooler as the humidity eases a bit and the air flow basically shifts from tropical to Tasman”.

In the South Island the weather will be even colder to begin with.  Exposed parts of Southland and Otago may struggle to even reach the teens on Saturday.

In Canterbury the wind flow means mostly sunny weather will kick in – but next week winds shift easterly for this region so temperatures drop back to the teens.  Conditions should be mostly dry and sunny though, especially inland.  Saturday will be several degrees warmer than Sunday – which means Spring in Canterbury will end hotter than Summer will start!

However windy weather in November and December can lead to very high temperatures in the east.  At this stage the South Island doesn’t look to benefit a great deal from this windier weather – however high pressure will move in next week – and next weekend might see some areas getting closer to 30 degrees as this high moves east and another northerly flow spreads across the country.

– image / Wind map for Sunday, the first day of summer – showers a cool south west flow over the South Island and generally windy weather for many areas / weathermap

With no anticyclone/stable air present from the East, hopefully we will not get any big mountain waves coming down at us from the SW moving up the Sth Isld. I have a feeling they’ll be something to really dread next winter if westerlies are present. Hope not, the SE upper trough waves are shockers enough. Meanwhile a straight NW as boss, with no SW shear or easterly crap … yeah bring it on. LUV the rugged westerly seas, they’re as wild as the wind. You can get bowled over by the spray alone in a decent nor wester here.