Sport – Football in what sort of weather? 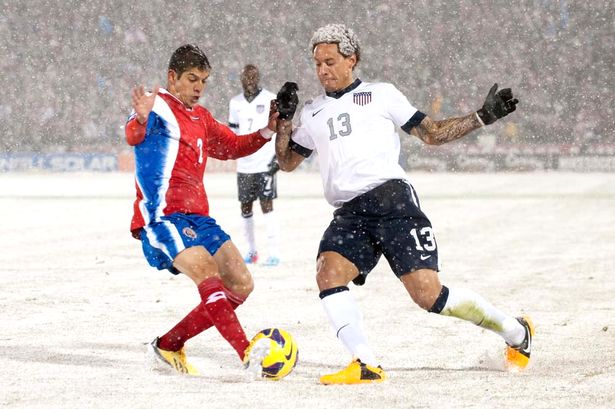 Rugby in this part of the world is played in all weathers and yet there’s a call for another winter code to be played in the sunniest  of conditions.

The World Cup should be played whenever the weather is most suitable in the host country rather than in a fixed period between June and July, UEFA secretary general Gianni Infantino said yesterday.

“Whenever you play the World Cup should be the best period for it,” acoording to Infantino.
“I had the same reflections on South Africa in 2010. It was a pity that it was winter.
Four years earlier in Germany, it was nice sunshine. South Africa is a beautiful country, but at five o’clock, it’s night and it’s 0 (degrees) Celsius. It’s not a celebration of football.”

In the case of 2022 hosts Qatar, Infantino agreed with UEFA president Michel Platini that June and July would be too hot despite plans to build air-conditioned stadiums.
“I fully share this view that you have to play in the best period for football; that is not June or July in Qatar.
“This is an issue that FIFA have to sort out. The sooner they do it, the better. The decision for 2022 was taken in 2010, so in 12 years you can organise yourself.”

Infantino regretted that football had become a winter sport in most countries.
“You see people in the stadiums with hats and scarves,” he said. “Why did England, who brought to us this beautiful game, decide that football is for the winter and not for the summer? Cricket.

“The month of June, which is the most beautiful month to play football, is hardly ever used except for the Euros and the World Cup. But the World Cup is played only every 12 years, more or less, in Europe.”