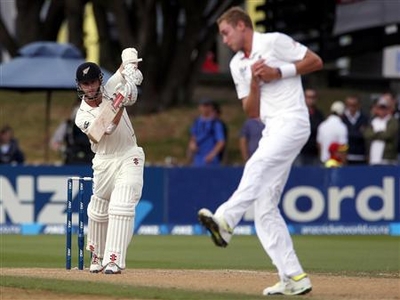 It has been a fascinating test match which has gone back and forth so far and today Auckland looks set to deliver another dry day for the match to keep unravelling.

Today is day four of the deciding third cricket test between New Zealand and England.

Over the weekend skies darkened but only briefly as any showers remained closer to eastern and northern parts of the greater Auckland region and also fell in places overnight.

Humidity levels increased a little over the weekend and may have played a part in the succession of wickets with 20 wickets falling over two days whereas only one fell all day on Friday. Swing appeared to come out of nowhere but has made the match much more colourful than the previous two.

Dry weather and sunshine with some cloudy areas is the forecast for today.There is the risk of an isolated shower as a few have fallen on two nights during the test across the greater Auckland city region.

Temperatures are set to be at a similar level to where they were over the weekend.

New Zealand have seven second innings wickets remaining with a lead of 270 so quick runs might be the order of the day before England get underway for a second time.