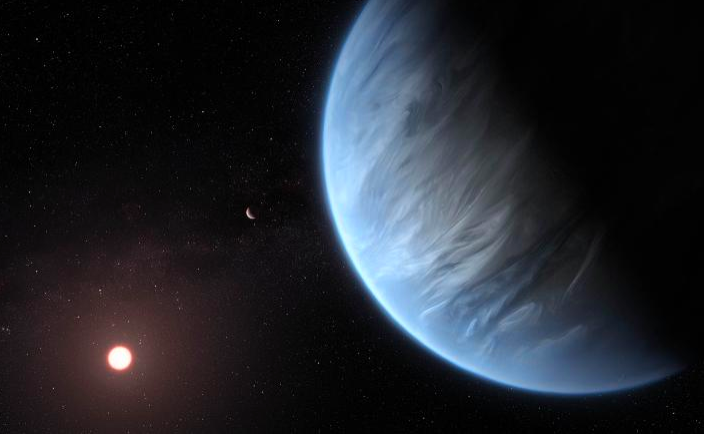 For the first time, astronomers have peered into the atmosphere of an exoplanet — a planet outside our solar system — and discovered both water vapor and temperatures that could potentially support life, according to a new study.

The exoplanet, known as K2-18b, is eight times the mass of Earth and known as a super-Earth, or exoplanets between the mass of Earth and Neptune. It orbits a red dwarf star 110 light-years away from Earth in the Leo constellation. The planet was first discovered in 2015 by NASA’s Kepler spacecraft.
A research team used archival data collected by the Hubble Space Telescope between 2016 and 2017 that captured starlight as it passed through the atmosphere of the exoplanet. The researchers said they clearly saw the signature for water vapor in the atmosphere when they put the data through algorithms. They also observed the signatures of hydrogen and helium in the atmosphere, two of the most abundant elements in the universe.
The detection of water vapor in the atmosphere of this exoplanet is particularly exciting to the researchers because the exoplanet also lies within the habitable zone of its star, which includes the right temperatures for liquid water to exist on the surface of the planet and potentially support life as we understand it.
The researchers published their findings in the journal Nature Astronomy on Wednesday.
“Finding water in a potentially habitable world other than Earth is incredibly exciting,” said Angelos Tsiaras, study author and research associate at the University College London’s Centre for Space Exochemistry Data. “K2-18b is not ‘Earth 2.0’ as it is significantly heavier and has a different atmospheric composition. However, it brings us closer to answering the fundamental question: Is the Earth unique?”
READ THE FULL STORY VIA CNN HERE