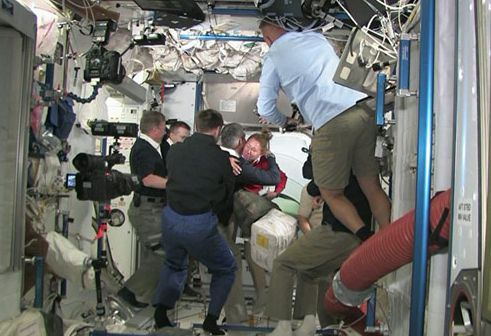 Atlantis docked with the International Space Station on Sunday for a week-long rendezvous, two days after blasting off on a historic flight marking the final liftoff of the U.S. shuttle program.

Space Shuttle Atlantis will deliver supplies and spare parts to the space station, and pick up a broken pump and transport it back to Earth for inspection, NASA said on its website. The shuttle docked at 11:07 a.m. ET in an “absolutely flawless” operation, according to Leroy Cain, deputy manager of the shuttle program.

Atlantis’ docking with the space station was done by executing a “back flip” maneuver that leaves the shuttle’s underbelly facing the space station, where crew members can investigate its condition, NASA said.

After checking for leaks, the crew opened the hatches between the two vehicles shortly after 12 p.m. ET.

“It was really moving to see the final docking of the shuttle to the space station,” Cain said, adding that it was the 12th such time Atlantis has done so.

The crews of Atlantis and the space station also will research the potential for a space refueling system.

Meanwhile, NASA is monitoring a piece of space debris that could be headed toward the space station, Cain said Sunday afternoon.

Data indicates that the point of closest approach would occur on Tuesday, the same day as a scheduled space walk by shuttle crew members, according to Cain.

“However, we don’t really have a good (probability of collision) on it yet,” said Cain, who cautioned that the size of the object is still not known.

More information is expected to be released later Sunday or Monday, he said.

A space-debris incident nearly two weeks ago prompted the crew of the International Space Station to take shelter inside two Soyuz capsules when it came within 1,100 feet of the station.

“American leadership will persist for the foreseeable future, I can guarantee you that,” Bolden said. In addition to taking cargo to orbit next year, NASA is working to partner with commercial interests in developing a crew vehicle, he said.

“We are hopeful in starting to ask for proposals from industry (in the) early part of next year,” he said.

A recent call from President Barack Obama re-emphasized aggressive goals for NASA, including exploration beyond lower orbit and into deep space, Bolden said.

“He wants to have humans on or near an asteroid in 2025, and he wants us to be in Martian orbit with the intent of landing in the 2030s. Those are two very well defined destinations that we’re really working hard on,” Bolden said.

When crew members conclude their mission and exit the space station, it will break an uninterrupted human presence in space that has lasted more than a decade. The international space station’s first expedition began in November 2000. The current expedition, the 28th, is manned by Cmdr. Andrey Borisenko, Alexander Samokutyaev and Sergei Volkov of Russia; Satoshi Furukawa of Japan; and NASA’s Ronald Garan and Michael Fossum.

President Richard Nixon commissioned the space shuttle program in 1972, three years after the Apollo program put a man on the moon.

The first shuttle, Columbia, blasted off in April 1981. Since then, space shuttle crews have fixed satellites, performed scientific studies, and ferried materials and people to International Space Station Alpha, a football field-sized construction project in orbit.

In 134 missions, the five space shuttles have ferried 355 astronauts half a billion miles in space, turning heroic feats into the routine.

When Atlantis lands, it will leave the United States with no way to lift humans into space for the first time in decades.

NASA will rely on the Russian space agency to ferry U.S. astronauts to orbit.