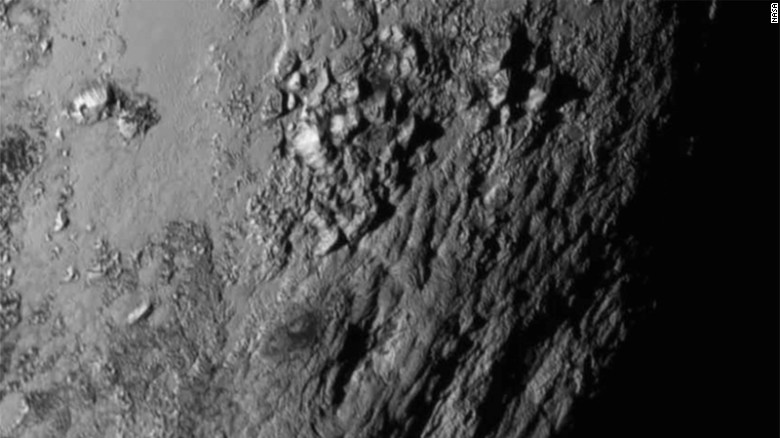 NASA on Wednesday revealed new images from the New Horizons spacecraft that flew by Pluto one day earlier.

The images the craft took and transmitted back to Earth are from the closest point the probe came to the dwarf planet as it made its milestone in space exploration history. With Wednesday’s photos, New Horizons is also sending a banquet of knowledge to scientists.

Among the discoveries are icy mountains, rising as high as 11,000 feet, which likely formed no more than 100 million years ago. That sounds like a long time, but not so long compared with the 4.56-billion-year age of the solar system. The area may still be geologically active.

The Pluto mission completes the reconnaissance of the classical solar system, and it makes the United States the first nation to send a space probe to every planet from Mercury to Pluto.

The flyby came 50 years after the Mariner 4 probe accomplished the first flyby of Mars, which sent back the first photos of another planet taken close up from space.

In the weeks that New Horizons was homing in on Pluto, NASA and its partner, the Johns Hopkins University Applied Physics Laboratory, published a barrage of images. First, they showed blurry spots that grew larger.

Gorgeous Pluto! The dwarf planet has sent a love note back to Earth via our New Horizons spacecraft, which has traveled more than 9 years and 3+ billion miles. This is the last and most detailed image of Pluto sent to Earth before the moment of closest approach, which was at 7:49 a.m. EDT Tuesday – about 7,750 miles above the surface — roughly the same distance from New York to Mumbai, India – making it the first-ever space mission to explore a world so far from Earth. This stunning image of the dwarf planet was captured from New Horizons at about 4 p.m. EDT on July 13, about 16 hours before the moment of closest approach. The spacecraft was 476,000 miles (766,000 kilometers) from the surface. Images from closest approach are expected to be released on Wednesday, July 15. Image Credit: NASA #nasa #pluto #plutoflyby #newhorizons#solarsystem #nasabeyond #science

By Tuesday, clear photos revealed the contours of the planet’s surface and of its largest moon, Charon. Wednesday images and information are just the beginning of 16 months’ worth of data the probe will send back to Earth.

“Pluto New Horizons is a true mission of exploration showing us why basic scientific research is so important,” said John Grunsfeld, a NASA associate administrator.

“The mission has had nine years to build expectations about what we would see during closest approach to Pluto and Charon. Today, we get the first sampling of the scientific treasure collected during those critical moments, and I can tell you it dramatically surpasses those high expectations.”

It wasn’t a sure bet that New Horizons would survive to send the images, after passing by projectiles racing through Pluto’s gravitational field.

Collisions with dust particles could have ripped through the probe like shotgun blasts, since the spacecraft moves about 8.5 miles per second. That’s about 40 times as fast as a bullet exiting a gun barrel.

New Horizons went incommunicado for 12 hours as it passed Pluto, and mission managers packed into mission control held their breaths. The radio silence was planned, while the craft collected data on Pluto and its five moons, but it was during that most dangerous phase.

Then, New Horizons ended its silence with a signal back to Earth, and the room burst into applause. The probe had survived its historic pass.

Renowned astrophysicist Stephen Hawking sent his congratulations via a YouTube video. “We explore because we are human, and we want to know. I hope that Pluto will help us on that journey,” he said.

At its lightning speed, New Horizons still took nine years to make it to Pluto. And it took a shorter route, which is a stroke of luck, too.

Had the cosmic timing been different, Pluto’s vast, elliptical orbit could have put it much farther out in the solar system than it is now. Since it takes the dwarf planet 248 years to circle the sun once, decades may have had to pass for Pluto to come within reach.

Even with that relatively close distance, the probe traveled more than 3 billion miles to reach Pluto on a complex flight path.

The New Horizons probe used the massive gravitational pull of planets in our solar system to help propel it, as it curved past them, and that may not have worked had Pluto been at another point in its orbit.

The dwarf planet already is dazzling mission managers. If Pluto had been covered in clouds, they wouldn’t have seen much.

Instead, they’re seeing a world with “various kinds of brightness, very dark regions near the equator, very bright regions just to the north of that and a broad intermediate zone over the pole,” said Alan Stern, the mission’s principal investigator.
And there’s snow.

“Pluto has strong atmospheric cycles. It snows on the surface,” Stern said.

“Pluto has turned out to be an extraordinarily complex, interesting world,” said Grunsfeld, the NASA associate administrator.

Replacing previous ideas of what the planet may have looked like with the reality was worth the trip.

On Monday, New Horizons settled one debate about Pluto — its size. Information gathered by the probe indicates Pluto is 1,473 miles (2,371 kilometers) in diameter. That’s somewhat bigger than earlier estimates, and it means Pluto is larger than all other known solar system objects beyond the orbit of Neptune.

And now, beyond Pluto

New Horizons looks like a gold foil-covered grand piano. It is 27 inches (0.7 meters) tall, 83 inches (2.1 meters) long and 108 inches (2.7 meters) wide. It weighed 1,054 pounds (478 kilograms) at launch. It has seven instruments on board to map the surfaces of Pluto and its largest moon, Charon. It also is studying their atmospheres.

The spacecraft was launched on January 19, 2006, before the big debate started over Pluto’s status as a planet. In August of that year, the International Astronomical Union reclassified Pluto as a dwarf planet.

But Stern disagrees with the IAU’s decision.

“We’re just learning that a lot of planets are small planets, and we didn’t know that before,” he said. “Fact is, in planetary science, objects such as Pluto and the other dwarf planets in the Kuiper Belt are considered planets and called planets in everyday discourse in scientific meetings.”

New Horizons will keep flying, heading deeper into the Kuiper Belt, a region that scientists think is filled with thousands of icy objects.

NASA and mission managers will decide later this year whether to extend the mission to study another small world out there.

Thanks for this article on Pluto WW Team. Will be interesting to see if this will bring Pluto back into being a Planet again.

Fantastic to see such clear photos of an object so far out in space. The other incredible thing is that the computer technology is now ten years old. While the article is not about weather, there are some of us out here interested in this sort thing so keep up the good work Guys.