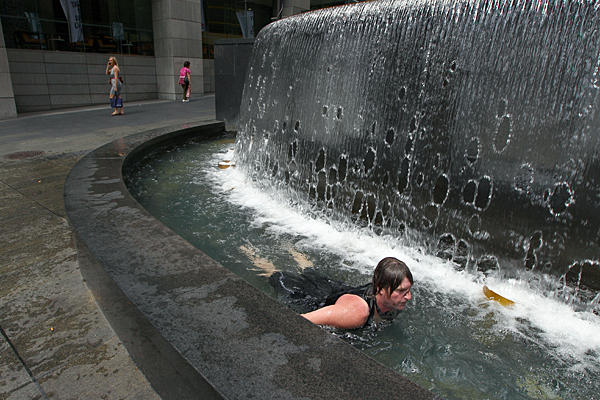 Australia has seen its share of heat and the big wet over recent times but the high temperatures has seen records broken across three states this month.

The heat pushed into South Australia almost two weeks ago beginning an eleven day run of over 30 degree temperatures. This is the third longest run of March heat in over 120 years of records.

Mt Gambier smashed the March record for consecutive days above 30 degrees with eleven. This is five more than the record and is also equal to the summer record set in 1956.

Melbourne has broken multiple records in this run of heat despite having records dating back 156 years. It has had the longest ever run of days above 30 and 32 degrees with nine days reaching 32.7 and above. The previous records were eight days above 30 and seven above 32, set in the same run in February 1961.

Nights have also been very warm in Melbourne meaning that buildings without air conditioning have struggled to cool from the daytime heat. The city has equaled the record of six mornings in a row failing to drop below 20 degrees. Tonight is likely to break the record with the mercury likely to be in the low 30’s or high 20’s most of the night. There is a chance that tonight will break the record for the warmest March minimum of 26.3 degrees.

All of Victoria has been bombarded by this heat with temperatures rising as high as 40 degrees at Cape Nelson. This is 19 degrees above the March average and half a degree short of the March record.

Records have been equaled and they have been doubled in Australia’s southern most state.

Launceston has been staggering in its consistently hot temperatures. It has doubled its record run of four days above 30 degrees with a staggering eight days, including a new record March temperature of 33 degrees.

Hobart came very close to its longstanding March record of 37.3 degrees today, reaching a top of 36.7 degrees. Just inland of Hobart, Bushy Park succeeded in equaling its 47 year old March record of 37.6 degrees. Strathgorden and Strathan had their hottest March day in at least 30 years.

I was in Melbourne last week on holiday. From Monday to Sunday the daytime temperature was above 30 degrees every day. I spoke to someone who has lived there for a number of years and they couldn’t recall a period where the temperature was above 30 degrees for that many days in a row, even in the summer months. One night it was still 31 degrees at 9pm where i was, lucky for me the place i was staying at had air conditioning.