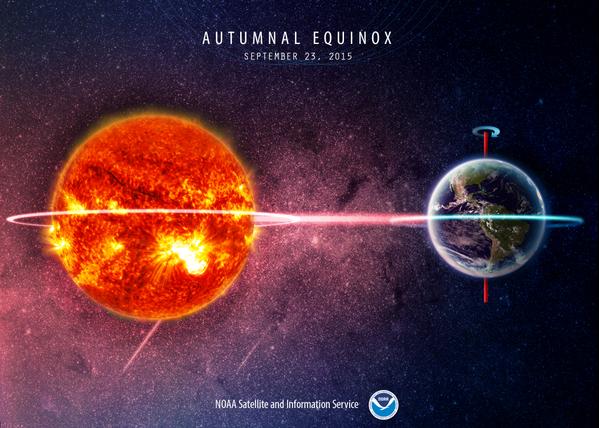 Kiwis have at least one reason to celebrate this week, despite some dismal weather in parts, as the sun heads back into the Southern Hemisphere.

At approximately 20:21 yesterday (NZT) the sun sat directly above the equator of the Earth; a fairly special event that happens twice a year, every year.

This event is called an equinox, and marks the exact point between the winter solstice and the summer solstice.  In the Southern Hemisphere it’s called the Spring Equinox – and in the Northern it’s called the Autumn Equinox (as per the image in this story).

Sept 23: Happy Equinox to all Earthlings. One of only two annual days when the Sun everywhere rises due East & sets due West.

Like the seasons, the length of our days is directly related to the particular tilt of Earth’s axis of rotation.
At the equinox, the axis is tilted neither away from or towards the sun – and as a result the length of day and night is more or less equal at every place in the world.
It’s not a coincidence then that the word equinox comes from the Latin; equi which means “equal” and nox meaning “night”.

So what’s the reason to cheer?
After the point of equinox, our days will gradually get longer, and nights shorter, and the sun will continue to rise higher into the sky each day. As it does every year, this brings about warmer temperatures as we head towards summer.

Another interesting fact of the equinox is that the sun will rise and set at exactly east and west at every place in the world (except the at the poles where the sun will neither rise nor set).