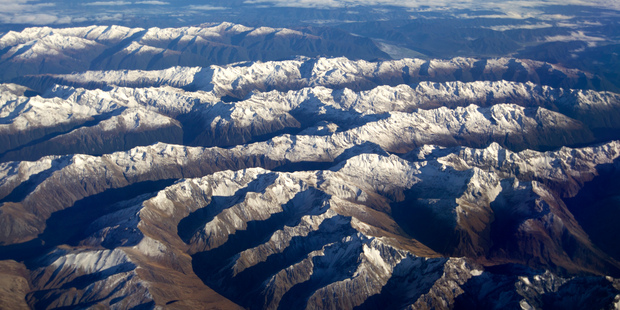 A third of the permanent snow and ice on the Southern Alps has vanished in less than four decades, according to an analysis of aerial surveys.

In an article published on Australian website The Conversation, three Kiwi researchers describe the story of the alps’ disappearing ice as very dramatic.

Partly using aerial surveys by the National Institute of Water and Atmospheric Research, the three authors have calculated the alps’ ice volume has shrunk by 18.4cu km or 34 per cent – and those ice losses have been accelerating rapidly in the past 15 years.

When compared with rapid glacier retreats in many parts of the world, the loss raised serious questions about future sea level rise and coastal climate impacts, they said. 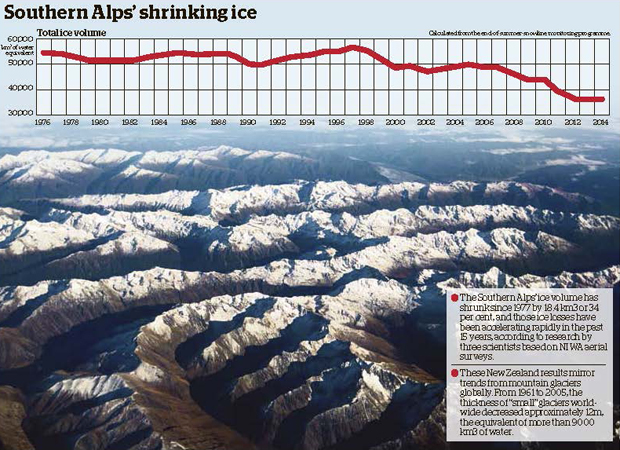 In 1977, Dr Chinn began taking aerial photographs to measure the annual end-of-summer snowline for 50 index glaciers throughout the Southern Alps, which are still taken by Niwa.

He and his colleagues have now used Niwa results to calculate the annual glacier mass balance, and to quantify the volume changes of small to medium glaciers in the alps.

These glaciers responded quickly to annual variability of weather and climate, and were in balance with the current climate.

But this wasn’t so for the 12 largest glaciers, among them the Tasman and Godley, which had a thick layer of insulating rocks on top of the ice lower down the glaciers’ trunk.

“Their response to new snow at the top is subdued, and may take many decades to respond,” the authors wrote. “Up until the 1970s, their surfaces lowered like sinking lids maintaining their original areas. Thereafter, glacial lakes have formed and they have undergone rapid retreat and ice loss.”

To make the calculations, they used the snowline survey data along with earlier topographic maps and a GPS survey of the ice levels of the largest glaciers to calculate total ice-volume changes for the Southern Alps up until this year.

An injury in 2000 had kept him off the high alps since then, but even before, the changes had been visible, he told the Herald. “One could see that less snow dumps in quite a few years meant pieces of rock which you knew were always covered suddenly were staying clear for 12 months of the year, and getting bigger.”

The World Glacier Monitoring Service estimated the 1890s extent of ice volume in the Southern Alps was 170cu km, compared with 36.1cu km now – a change the authors said was evidence of the local effects of global warming.

Based on regional warming projections of 1.5C to 2.5C, it has been projected by glaciologists Valentina Radic and Regine Hock that just7 to 12cu km of ice would remain on the alps by the end of this century.

Kiwi glaciers do it their way

Research suggests that ancient New Zealand glaciers were out of tune with their Northern Hemisphere counterparts when they grew and subsided thousands of years ago.

The study, published this week in the US journal PNAS (Proceedings of the National Academy of Sciences), goes against an alternative view that our glaciers followed the same patterns as those in the opposite hemisphere between 30,000 and 20,000 years ago, when ice sheets were at their most recent maximum extension.

The study, led by Professor Henrik Rother of the University of Greifswald in Germany, analysed a record of glacier debris in the Southern Alps’ Rangitata Valley from between 28,000 and 16,000 years ago.

According to the study, the records of glacier movement preserved in “exceptional detail” showed New Zealand glaciers peaked earlier and retreated more slowly than Northern Hemisphere glaciers, and were only partially influenced by northern climate patterns.

“One argument suggests that during the last deglaciation, there was a rapid retreat of New Zealand glaciers that was more or less synchronised with those in the Northern Hemisphere, and there’s good evidence for that from a numbers of sites here,” he said.

“Then there’s the alternative that the ice stuck around for a bit longer, which this study is reinforcing. It’s hard to know which one will stand the test of time.”