Home > News > Southerly on the way for Thursday and Fr...

Southerly on the way for Thursday and Friday 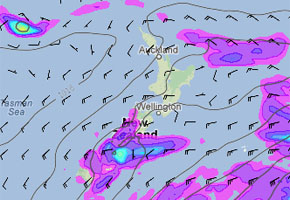 A southerly change is due to move up the east coast of the South Island this coming Thursday and is likely to deliver some rain about Canterbury, other eastern parts of the South Island including Southland, Otago and Marlborough are more likely to receive precipitation in the form of showers meaning lesser amounts of the wet stuff overall.

There is the low risk of a thunderstorm popping up in Canterbury in the afternoon as this southerly change moves through so something to keep an eye on.

On Friday morning this southerly burst will move onto the east coast of the North Island, Wairarapa is likely to get most of the rain with Hawkes Bay and Gisborne subject to showers.

Due to the southerly nature of this change western areas of both islands are largely going to miss out on its affects, Fiordland and South Westland may cop some rain in the initial stages as the front moves onto the South Island on Thursday morning.

Key dates for precipitation for the North Island are tomorrow afternoon, there may be the odd shower in a westerly airflow mainly about Taranaki northwards and including the Bay Of Plenty. Those light showers will clear by midday Thursday. Early next week a front moving in should deliver further showers for the North Island. Neither areas of precipitation at this stage look to be really good rain makers which some districts need including the Waikato and Bay Of Plenty so hopefully something gets going soon for early December.