Southeast Queensland into the mid-30s this week 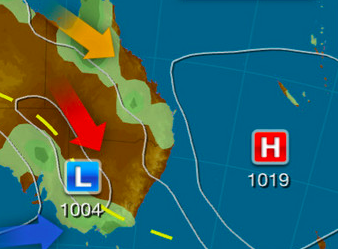 With balmy days and thunderstorms on the cards, the next seven days will have a distinct summer-like feel throughout southeast Queensland.

Brisbane reached 34.4 degrees Saturday afternoon, its warmest day this early in November in over twenty years.

The mercury reached 36 degrees at Gatton, Amberley and Archerfield making it their warmest day since February.

On Sunday, it will be a touch cooler thanks to a southerly arriving in the early hours of the morning and a sea breeze in the afternoon. Temperatures will remain in the high-20’s and low 30’s throughout the southeast, although the humidity levels will be on the rise.

Looking further ahead the mercury will comfortably sit in the low 30’s, warming up again in the the mid-30’s towards the end of the working week. This heat is due to a nearby low pressure trough and while the trough remains nearby, thunderstorms become a risk from Tuesday onwards.