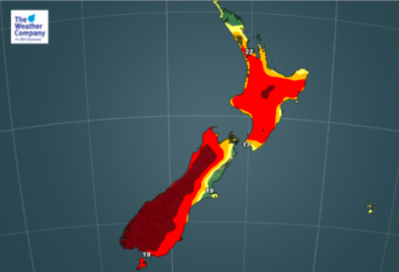 With daytime heating far more likely to lead to cloud build ups and downpours over the coming five days this added cloud will reduce daytime temperatures from their peak earlier this past week when parts of Central Otago climbed to 33 degrees two days in a row.

With the exception of today Saturday, most highs in Central Otago range from 26 to 30 degrees over the next week. Today’s high is 24. This is still up to 8 degrees C above average.

The heatwave – a prolonged spell of hotter than average weather – is connected to the same one that has smashed temperature records in both Hobart and Melbourne this past week, Australian records that dated back to the 1800s.

Other parts of New Zealand will be warmer than usual over the weekend, but sea breezes in coastal areas, especially in the north – along with added cloud cover elsewhere – means many of our main centres won’t be “hot” but will remain mild.

– Maps by The Weather Company (An IBM business and an official WeatherWatch.co.nz business partner)