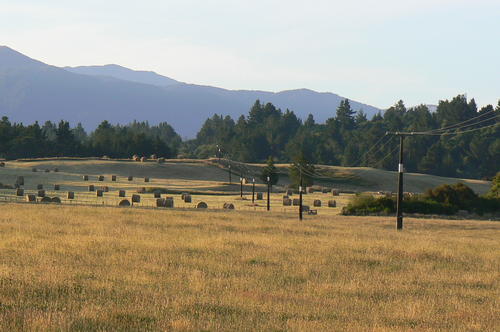 As exclusively predicted by WeatherWatch.co.nz parts of New Zealand hit 30 degrees today for the first time since spring started.

Both Blenheim and Alexandra climbed to 30 degrees under hot winds and mainly clear skies.

However a small shift in the wind direction meant eastern coastal parts of the South Island – predicted to reach near 30 – only made it to 20, such as Timaru, Oamaru and Ashburton.

Hotter conditions did, however, arrive earlier than expected in the North Island.  Masterton reached 25 degrees but it was further north that really took the heat.

Napier climbed to 29 degrees this afternoon with Hastings hitting 28.

Theres a weather station in Whangarei on line it recorded 35.6c around 530 pm.The other day it was 33.something around the same time,an hour later it was only 24c,maybe its a tree shading when the sun goes around behind it by then after shining on the screen.

Perhaps you should do an article about the standard requirements for measuring temperature, Phil.

Unfortunately a lot of the cheap weather stations being set up do not have proper radiation shields, or are not sited properly, and so people think their temperatures are actually higher than they really are…

To Dave, I actually don’t care whether you believe it or not, Ive got better things to do than make up a top temp. :o)

I never said you made it up, my guess is the reading came from a poorly sited thermometer or weather station.

It was cool and dull here in Kapiti today, i did almost! think about putting on the heater at one stage, bit of a shock after a muggy 22 yesterday!
It was so dark this morning with the drizzle, that some of my patients I was sitting up for breakfast thought I was the night nurse waking them up early!