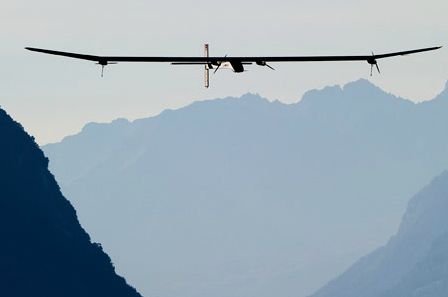 It takes more than puddles on the runway to stop most planes from taking off, but then Solar Impulse isn’t like most planes.

The rest of the aerospace industry has gathered at the Paris Air Show to watch fighter jets, stunt planes and commercial aircraft roar and thunder into the threateningly gray skies overhead.

But in a tent at the end of the airfield, the team behind the Solar Impulse is quietly waiting for the clouds to clear and give them a chance to show what their revolutionary plane can do.

The plane was the brainchild of two aviators — Bertrand Piccard, who made history with the world’s first round-the-world hot air balloon flight in 1999, and Andre Borschberg.

It has the wingspan of an A340, the weight of a sports car, and the power of a scooter — but as pilot Borschberg is quick to point out, it’s not how much power it has, but where the power comes from that counts.

“It flies at a speed of about 70 kmh, but speed is not what matters, it is the energy,” he insists.

That energy comes from the sun. Solar Impulse is a zero-fuel aircraft: all its power is supplied by more than 11,000 solar cells which coat its massive wings.

In the first major test of the plane, in July 2010, they provided enough power to allow the plane to fly non-stop, day and night, for 26 hours.

The next challenge, set for 2014, is to see if it can be flown non-stop around the world.

Another thing that sets the Solar Impulse team apart from most of the people at the Paris Air Show is that they are not here to sell a product — instead they want to sell the idea of sustainable energy.

“We want to demonstrate that technology allows us to keep the quality of life we have today, to achieve our goals, but do so using less energy,” said Borschberg.

“If you can do what we’ve done with solar energy in a plane, then we can definitely do it on the ground,” he added. “Our aim is to motivate people to change.”

Borschberg, who flew the Solar Impulse prototype HB-SIA on that 26-hour journey says that while the plane’s spindly build means it can be tough to control, it is fun to fly — and even better to be able to do so without wasting resources.

“On the 24-hour flight I collected so much energy that if I had had more cells to store it in, I could have fed it back in to the grid when I landed, and that is a tremendous feeling, compared to how much fuel you normally use when flying.”

Next on the agenda is Solar Impulse Mark II, a modified version of the original plane which will have a bigger cabin — a necessity for that round-the-world flight.

Borschberg is under no illusions that the work of the Solar Impulse team will prompt a wholesale switch to clean energy overnight, but he hopes to light the spark that begins that change.

He said: “It will take time until flying is completely clean, but everything about flying takes time: It took 25 years from the first flight to Charles Lindbergh’s first flight across the Atlantic.

“It will take time, but this is the first step.”