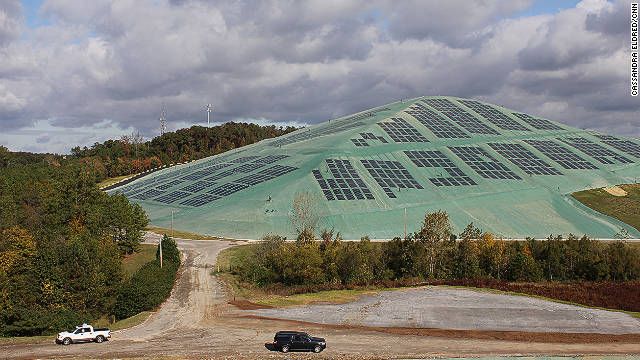 Hickory Ridge landfill was once a mountain of trash sitting idle on the outskirts of Atlanta, Georgia.

But now, with its 10 acres of solar panels, the old landfill has been given a new lease of “green” life.

“When a landfill is (finished with) taking waste, it basically is dormant and there’s not a lot of uses for the property,” says David Stuart, area environmental manager of landfill owners, Republic Services, Inc.

“But its natural attributes — being a tall structure, out of the shadows of the tree line — gives it a unique advantage as a solar project,” he added.

The Spectral PowerCap designed by the Carlisle Energy Services is lined with 7,000 flexible solar strips which produces one megawatt of energy.

The electricity generated is collected in each panel much like a solar calculator would, says Stuart. But rather than powering a keyboard it goes towards helping power the local grid.

Beneath the solar panels, gas pumps have been driven deep into the ground collecting methane gas, which is also used for power production.

The liner made of thermoplastic polyurethane is similar to that used on commercial rooftops and is designed to keep water out and methane gas in.

Solar landfill has green energy covered As the waste breaks down the liner flexes to maintain a snug fit.

Installing the solar panels is initially more expensive than the usual method of closing landfills, but the solar liner pays off with lower maintenance costs.

And if there are any problems that happen with the landfill liner system its very visible and very easy to repair.

A similar solar landfill project is underway in Madison County, New York where the energy generated from the eight acres of panels is being used to run the recycling center next door.

According to the U.S. Environmental Protection Agency there are around 100,000 closed landfills in the U.S. providing thousands of acres of property that could be used for renewable energy development. Many are close to urban areas and power lines.

Landfills are a constant reminder of the waste we produce but projects like these could help dispose of the view that they are simply costly eyesores.