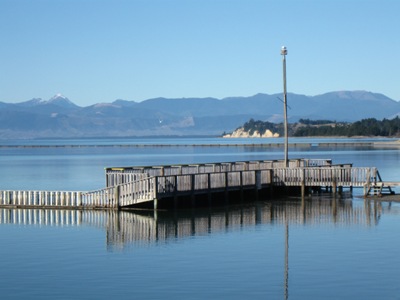 Rain warnings are in place today for the West Coast and headwaters over Otago and Canterbury as a front slowly edges its way. The Government Forecaster MetService sees prolonged heavy falls a probability.

Signficant rainfall totals were also issued last weekend however the amounts were minimal but this one could see some localised downpours over a less populated area of the country.

Trampers are advised to be aware of rising rivers and streams in the region as they could rapidly increase in flow as a result of heavy rainfall.

Scattered showers could still affect Northland and Gisborne today as they did yesterday in a east to southeasterly windflow.

Elsewhere some high cloud could thicken up over parts of the Mainland but mostly dry overhead conditions are anticipated.

Temperatures across the board should be near average if not 2-3 degrees above as a pool of mild to warm air hovers over us as an anticyclone moves away to the east.

This time next week could see much of the country shrouded in cloud during the Easter break with some rain across two thirds of the country.

We’ll update RainWatch later today as we update the situation across the West Coast but also look further afield.