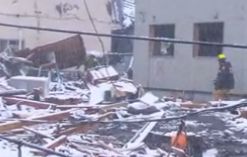 Tokyo (CNN) — Burdened by the weight of mounting national tragedies, residents in Japan painted a bleak picture Thursday of the still-unfolding crises but remained hopeful that they will pull through.

In the hardest-hit parts, thousands of citizens, most of them elderly, settled in into shelters — indefinitely.

They found comfort in daily routine: lining up for lunch, folding and unfolding what few belongings they salvaged before walls of water devoured their communities.

In the capital, long lines of foreigners waited outside the immigration office for permits to temporarily leave Tokyo.

And at the quake-ravaged nuclear plant in Fukushima, air-drops of water did little to lower potentially perilous radiation levels.

Ayana Suzuki said she can’t watch the news anymore. So she rented a stockpile of comedies to get her mind off the tragedy.

Inside a Japan quake rescue effort “Food and water (aren’t) delivered to disaster areas,” the 20-year-old Tokyo resident said, referring to the wiped-out infrastructure in Miyagi Prefecture. “I’m really upset not to help.”

With each passing hour, the National Police Agency adds to the grim total: more than 5,000 dead and nearly 10,000 missing since Friday’s 9.0-magnitude quake unleashed a tsunami on a nation already grappling with an unsteady economy.

“Food shortages in Tokyo are now becoming acute because of the panic,” said Aaron Lace, a Canadian living in Tokyo who fled to Bangkok.

But for those left behind without homes, the elements conspired to rob them of hope as cold, snowy weather hampered rescue efforts.

In the town of Minamisanriku, mud, seaweed and fishing nets settled on the top floor of a three-story elementary school building.

Backpacks remained in cabinets, where 107 children left them when they ran for their lives.

Principal Atsushi Asokawa sifted through the muck and searched through school office desks.

“I’m looking for important files to ask for instructions from the government,” he said.

“I will wait for the kids to come back.”

The focus of the world is zeroed in on the Fukushima Daiichi plant.

Japanese forces made four helicopter passes in about a 20-minute span Thursday morning, dropping 7.5 tons of seawater each time on the facility’s No. 3 reactor in order to cool its overheated fuel pool. Experts believe steam rising from that pool, which contains at least partially exposed fuel rods, may be releasing radiation into the atmosphere.

A Japanese government spokesman, Noriyuki Shikata, warded off fears of an imminent meltdown, telling CNN on Thursday, “We have not seen a major breach of containment” at any of the plant’s troubled nuclear reactors.

A meltdown occurs when nuclear fuel rods cannot be cooled and the nuclear core melts. In the worst-case scenario, the fuel can spill out of the containment unit and spread radioactivity through the air and water.

That, public health officials say, can cause both immediate and long-term health problems, including radiation poisoning and cancer.

About 200,000 people living within a 20-kilometer (12-mile) radius of the plant have been evacuated; those living 20 to 30 kilometers from the site have been told to remain inside. Authorities also have banned flights over the area.

Several countries, including the United States, have called for a broader range. American troops, in the country to help with relief efforts, have been warned not to get within 80 kilometers (50 miles) of the plant.

Twenty-five kilometers from the plant, the town of Minamisoma was ghostly quiet, with empty streets and shuttered shops.

“People have not evacuated, they are staying at home,” said Koichi Shiga, who owns a hotel there. “There was a ration of 10 liters of gas, and I saw a long line of people.”

But the nuclear fears have spawned a mass exodus from the nation’s capital.

The U.S. State Department said Thursday it will charter planes to evacuate about 600 family members of American diplomatic staff — and arrange the departure of private citizens from affected areas.

Kosuke Deura, a 19-year-old Tokyo resident, said he would like to leave if the situation gets worse.

“But I am a student, and I don’t have a lot of money,” Deura said Thursday. “So I can’t leave here.”

Meanwhile, the constant threat of more earthquakes — and hundreds of strong aftershocks — do little to calm rattled nerves.

“I’m really concerned … we still don’t know exactly when the next big quake is going to happen,” Kyohei Kiyota, who lives outside Tokyo, said Thursday. “It is really scary. To prepare for the next quake, we have to know about it.”

And yet, hope persists.

Suzuki said she’s optimistic more survivors will surface — and that her fellow citizens will continue to handle the adversity with the steady demeanor that has impressed the world.

“We are very proud of our Japanese (people),” she said. “We can get through this.”