Home > News > Snow expected to be costly for farmers...

Snow expected to be costly for farmers 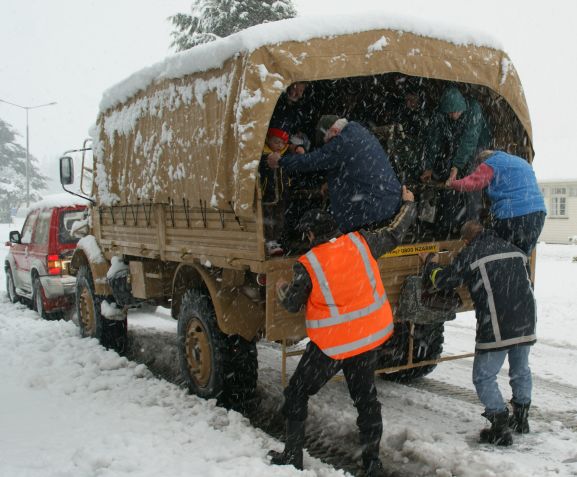 The sudden cold snap that has settled over the North Island may be costly to farmers as snow continues to fall says WeatherWatch.co.nz forecaster Philip Duncan.

All motorists stranded on the Napier Taupo highway have been rescued this morning but some were suffering from hypothermia.

timing for lambing.  “If we’re seeing humans suffering from hypothermia inside a car with clothes and sheltered from the wind it’s hard to imagine that lambs will be able to withstand the cold along with near gale force southerlies”.

Mr Duncan said the wind chill in exposed farms would’ve been closer to -10 overnight and will still be well into the negative single digits this afternoon.

Snow is still falling from Central Plateau to the Hawkes Bay Ranges and while the freezing level is slowly rising temperatures won’t be rising significantly for at least another 24 to 48 hours.

Taupo and Napier are both on 8 degrees this hour.   Yesterday afternoon Taupo was just 3 degrees.

Exposed places across the North Island are getting southerly wind gusts up to 80km/h.

Meanwhile Auckland isn’t escaping the cold either.  At 2pm Auckland was on just 8 degrees the coldest of the three main centres and was two degrees colder than Invercargill.

WeatherWatch.co.nz has revised Auckland’s high today to just 9 or 10 degrees.

Meanwhile the Army has saved stranded families on the Desert Road and the Napier-Taupo Highway.

Warmth, food and a place to stay were provided for 56 people in Waiouru Military camp after they were rescued from their vehicles by Army personnel in Unimog trucks.

“The road to Taihape was opened this morning and many motorists were able to get out, but the bad weather is continuing and the road is closed again,” says Major Monique Brown from Waiouru Camp.

“It’s very cold out there and we are glad to get them all into some warm shelter with a nice hot drink.”

Motorists were expected to be ferried to their vehicles and given a short window to evacuate Waiouru from 12:30 pm today after the road south to Taihape is cleared.

Assistance has also been provided to motorists on the Napier-Taupo road by Army personnel from 7 (Wellington, Hawkes Bay) Battalion in Napier.

The New Zealand Army provided rescue assistance on SH1 and the Napier-Taupo Road after requests for assistance were received from the NZ Police.

cold as here, a bit windy and lots of rain, paddocks are flooded and the rain just keeps on coming. SICK OF IT ha ha

Te Aroha has a light dusting of snow on it, its very cold, almost like the start of september all over again, oh and the rain!!! had 25mm over night and probably got another inch today (not going out to confirm this though)