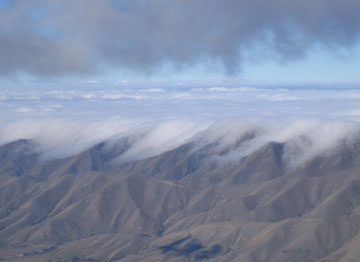 After the heat of recent weeks it appears this coming week may not quite be so warm as a couple of fronts moving over the country are likely to keep a lid on the temperatures.

It was another mostly dry and warm weekend for much of the country but this week looks as if some rain or at least some showers should fall from time to time.

“Again it pretty much depends where you are” says Head Weather Analyst Philip Duncan”but it is looking more changeable as a whole compared to previous weeks. The further south you are perhaps the more noticeable it will be” he says.

Fire bans are still in place and fire risks have increased in some parts again over the last few days as the heat has dried out forests, paddocks and grassy areas.

“We’re hopeful that some showery or rainy spells could dampen things down a little” says Weather Analyst Richard Green.” There may not be a lot of rain but a smattering is still better than nothing” he says.
“Cooler temperatures are also a little more helpful if there are problems with fires than the intense heat we have been seeing”.

Yesterday temperatures soared once more into the mid thirties over inland areas of the South island and for the eighth time in recent weeks Hanmer Springs took out the national high with 34 degrees.

WeatherWatch.co.nz has observed the heat this summer has still been noticeable over Central Otago however it seems North Canterbury has just been a notch or two hotter.

There are indicators that the hottest part of the summer is now behind us but there’ll still be some high temperatures with further dry spells from time to time.

Homepage image of cap clouds near Omarama.This is where easterly blown cloud struggles to get over the hills across to the MacKenzie Basin.By soaring.co.nz