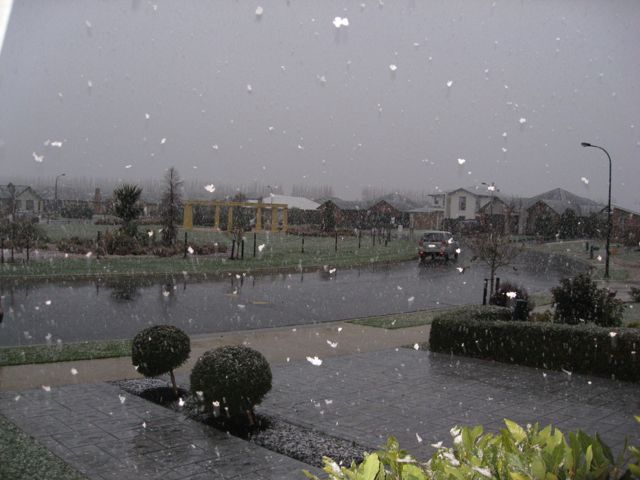 WeatherWatch.co.nz is predicting a strong and snowy polar blast to move up the southern and eastern coastlines of both islands this Sunday and Monday delivering strong south to south east winds and snow to sea level.

Earthquake hit Christchurch is directly in the firing line but according to new weather data in this evening Christchurch won’t be the only place.  Invercargill, Queenstown, Dunedin, Oamaru, Ashburton, Timaru, Kaikoura, higher suburbs of Wellington and even Taupo may have snow flurries or a rain and snow mix.

Sleety showers may also affect other exposed main centres such as Palmerston North and Masterton and snow may also fall to low levels around Mt Taranaki, including the town of Stratford.

The data comes from automated models that WeatherWatch.co.nz partially uses to create forecasts but forecasters at WeatherWatch say snow is looking most likely in Canterbury – and that predictions for most other regions or centres (mentioned above) are far more borderline.

Heaviest snow in Canterbury is expected to be north of Timaru.

“The air is certainly cold enough so it’s just a question of how much sleet and snow is in this wintry outbreak” says WeatherWatch.co.nz Analyst Richard Green. “However this evening it’s looking more promising for snow with the models all giving similar predictions at the moment”.

Models and computer data can’t be completely relied on but do play a signifant role in day to day forecasting – but a more concrete prediction won’t be likely until late Friday or saturday.   Snow to sea level in New Zealand can be very tricky to predict due to the Southern Alps, which can stop snow from falling but also stop it from clearing.

“…the ingredients appear to be coming together at this point and freezing temperatures are looking likely. If snow does take place, it’ll be Christchurch’s first fall in 3 years ” Mr Green says.

“Often when the air is this cold, rain and snow can subside high up and dry up as it makes its way to the ground but if circumstances change from how they’re looking at the moment and the windflow turns more southeast, snow can build quite rapidly along the foothills and upper plains of Canterbury” according to Richard Green.

Latest models indicate a strong south to south east flow on Sunday with WeatherWatch.co.nz saying the chance of snow falling to sea level is moderate.  MetService has moderate confidence snow will be heavy enough in Canterbury to prompt snow warnigns.

WeatherWatch.co.nz predicts the icy blast to move up the east of the Mainland later on Sunday and lasting through much of Monday before easing and clearing by Monday night or early Tuesday morning.

Temperatures are expected to rise to only 5 or 6 degrees on Monday for both Christchurch and Timaru but the biting southerly will make it feel considerably colder – well below zero in exposed places.

Farmers are urged to be prepared to shelter stock and trampers are warned of the severe weather heading in.

WeatherWatch.co.nz also advises motorists to be prepared for potential road closures or the need for chains on Sunday and Monday.

Head weather analyst Philip Duncan says sleet is possible in Wellington too with snow possible on the high up suburbs “if the moisture levels remain high”. Heavy snow may affect the summit of State Highway 2 over the Rimutakas, State Highway 5 on the Napier Taupo highway and State Highway 1, the Desert Road, on Monday but Mr Duncan said it was too early to know if the snow would be heavy enough to cause North Island road closures.

hows the forecast looking for christchurch now its possibly less than 24 hours away? how much are we possibly looking at and when is it likely to fall?
cheers
nath

From MetService:   Heavy Snow Warning, Areas Affected: North Canterbury and Kaikoura. Snow is expected to lower to about 300m on Sunday morning and to near sea level Sunday afternoon. From about 9am Sunday to midday Monday, expect 20 to 30 cm to accumulate above 300 metres, and 10 to 20 cm to lower levels.

is there any chance of sleet or precipitation for Nelson?

It’s possible but Nelson is very sheltered from this type of weather – but if the snow is fairly heavy then it should be a fairly short drive to find some!

Well up at this hour due to a 30second earthquake, go figure! How are your model outputs looking this morning for Christchurch snow. More or less positive? GFS seems to have lower precipitation now from yesterday, hope this changes back though. If you were to state a ‘range’ from one end of the continnum to the other how many centimetres do you think Christchurch city would see?

Computer models haven’t backed off from the snow predictions but they have eased a bit on the chance of rain.  So clearly less rain means less snow – but the ingredients are all still there.

The one nagging factor in us being more certain of snow is the wind direction…which is conflicting in the models.  Some say S, others SE, and some say SW – which is what this morning’s data is suggesting – hence the back down in confidence of rain.

Well have our best idea so far this week around 5pm today.

Just wondering why for Christchurch, the Met still seems to have Sun/Mon with SW with showers/sleet rather than SE flow with snow?

They have moderate confidence of a heavy snow warning for Christchurch so unsure why, you’d need to ask them sorry!

Looking forward to some snow in Christchurch!!!
A shame about the damaged houses, but snow is the best thing about winter.