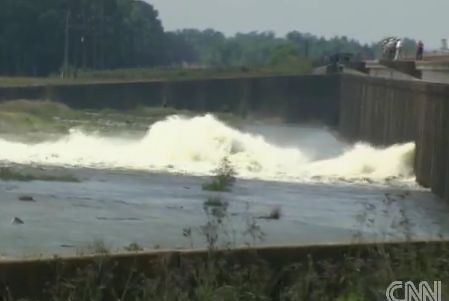 Residents of towns along the swollen Mississippi River on Monday NZT packed up their valuables and made last-ditch efforts to place sandbags and makeshift levees outside their homes, trying to protect themselves and their homes from rising waters.

“I have never experienced anything like this in my life,” said Brett Ansley, 24, as he was hitching up his trailer home in Krotz Springs, Louisiana, to move it to higher ground. “It’s crazy. It’s unreal.”

These efforts occurred as the U.S. Army Corps of Engineers opened two additional gates Sunday morning on the Morganza spillway, located about 185kms northwest of New Orleans. This is after opening the first two bays the previous day.

The plan is to let out water from as many as one-fourth of the spillway’s 125 bays to spare the Louisiana cities of Baton Rouge and New Orleans from severe flooding, Corps spokesman Ricky Boyett has said. But it maystill affect nearly 4,000 people who live along the river, as it sends water toward homes and farmland in the Atchafalaya Basin, according to Louisiana Gov. Bobby Jindal.

“At this time, we are currently monitoring the river, but it is too early to know if additional gates will be opened today,” Boyett wrote in an e-mail to CNN.

Some of the spillway’s gates will likely be open for weeks, and it’ll be at least that long before the river falls safely below flood stage and those who have evacuated can safely return, said Col. Ed Fleming, the Corps’ New Orleans district commander.

Fleming said the decision to open the spillway, along with similar decisions made in recent weeks as the floodwaters moved southward, was done to address a historic excess of water in the Mississippi River and its tributaries. While the spillways will divert water away from Louisiana cities, low-lying central parts of the state will be flooded.

Across the South and lower Midwest, floodwaters have already covered about 3 million acres of farmland, eroding for many farmers what could have been a profitable year for corn, wheat, rice and cotton, officials said.

Authorities in St. Landry Parish issued a mandatory evacuation that affected about 2,000 people — including about 750 people living in 240 homes in Krotz Springs. Residents in other areas were under a voluntary evacuation, with authorities encouraging but not ordering them to leave.

Don Menard, the parish’s president, said Sunday afternoon that water levels in Krotz Springs appear lower than expected — though he said he thought they’d rise considerably after midnight, and especially if and when more floodgates are opened.

“It’s the fear of the unknown,” Menard said, noting estimates that the water could rise ]3 to 5 metres] in spots.

“These are predictions, no one knows for sure what will happen.”

Some city residents “were waiting until the last second to leave,” he said Sunday, while others used whatever they could to try to minimize damage to their homes for when the high waters roll in.

“There were a few seemingly futile attempts to put sandbags up,” said Abou-Shahla.

Following the opening of the spillway, the National Weather Service revised its flood forecasts and lowered projected cresting levels in some Louisiana towns. Forecasters also said the river may crest earlier than first thought in some areas.

“The river at Baton Rouge through New Orleans will crest sooner than upstream locations due to Morganza spillway operations,” said the latest forecast, issued Saturday. “After crests, stages will remain at the same levels and New Orleans will fluctuate near flood stage while Bonnet Carre and Morganza are operated.”

Residents were counting on a levee for protection. In addition to the mainline levee along the river, starting near Vicksburg and extending northeast for more than 20 miles, a so-called backwater levee offers shelter.

The backwater levee is designed to keep water from backing into the Yazoo River delta and is designed lower than the mainline levee so that water can flow over it.

Peter Nimrod, the Mississippi Levee Board’s chief engineer, said Sunday there was a “remote” chances the levees could be breached, though he expressed confidence they would hold. Even if it stays intact, the expectation is excess water will rush over them for several days.

“There will be a lot of sleepless nights, when this thing starts overtopping,” Nimrod said. “It will be a very stressful time for everyone.”