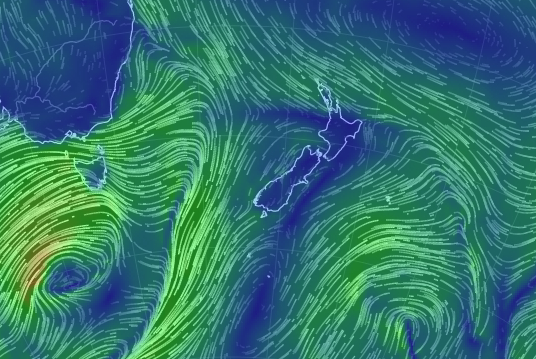 We’ve seen some wet weather in the past 24 hours over most of the country, and today we’ll see another front moving in from the Tasman, and a northerly airflow strengthen. This will result in thickening high cloud, and rain for the West Coasts of both islands – firstly the south, and then the north by evening.

Areas north of Waikato may see showers in the morning clear up, only to return in the afternoon, as the front hits the country.

In the South Island, skies will stay dry in the east to start with, though early evening may see a few spells of rain move in, as the front moves in from the west. The mountain ranges running up and down the middle of the country should prevent most of it from making its way east, so only brief rain is expected.

North Island emperatures will be in the 18 to 21 degree range Waikato northwards, while the rest of the North Island is looking at the mid teens (although about the Manawatu may get upwards of 20 degrees).

For the South Island most places are in the mid to low teens, inland Canterbury, inland eastern Otago and inland Marlborough may see highâ€™s around 16 to 17 degrees however, as these areas have a more northerly airflow and donâ€™t pick up on the cooler northeasterly right on the coast.