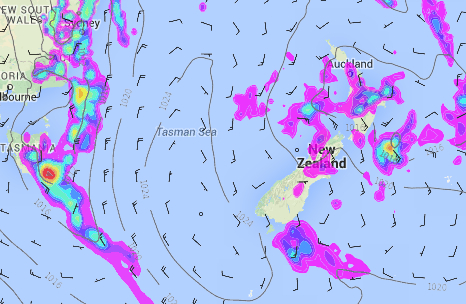 Thursday is looking like a day of two halves – north and south, with unstable conditions for many resulting from cold upper air levels at high altitudes.

In the west from Auckland right down to Manawatu, morning showers may be heavy with thunderstorms and hail, then easing to intermittent showers in the afternoon and clearing by evening for most. Light winds will freshen from the southwest by midday – while Northland can expect a similar pattern, though without the same risk of thunder in the morning.

Along the East Coast, southwesterlies should freshen in the morning and bring showers to most, with the odd heavy fall possible about northern parts of East Cape, as well as the Wairarapa and Hawke’s Bay.

In the South Island, it’s looking like sunny spells with periods of cloud for most, and light southerlies along the east coast. Isolated showers are possible in the afternoon and into the evening about inland hills and ranges, some of which could be heavy with a chance of hail too.

For Nelson and Buller it’s looking rough around the ranges, where heavy rain, thunderstorms and even hail could make an appearance.

Along the coast north of Banks Peninsula, skies will be a bit cloudier for much of the day, with only patchy light showers likely to disrupt any outdoor plans.