Similar weather tomorrow but some changes 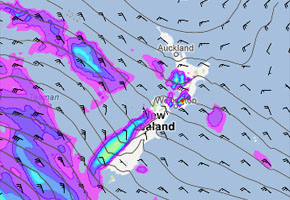 Tomorrow we can expect similar weather as we have had today, high cloud will move out of Canterbury and more sunnier weather will prevail with quite mild temperatures. Winds will be strong from the west or northwest across the country, easing in the South Island late afternoon or evening especially in eastern coastal areas.

The North Island can expect mostly cloudy skies in the west however with a few showers south of Taranaki, the odd shower may develop south of Auckland in the afternoon however they will be few and far between. Eastern areas of the North Island will get dry weather although there will be plenty of high cloud. A mix of sun and clouds can be expected in the Bay Of Plenty.

For some excitement the West Coast of the South Island should get some thundery weather overnight tonight, lightning is currently really going off in Fiordland and a few strikes are developing in South Westland.