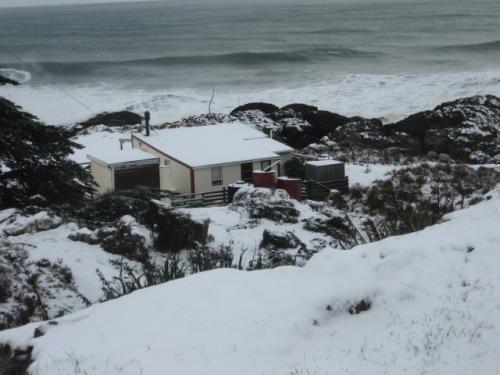 Computer models have, for a week now, been predicting a very large low in the Southern Ocean which looks set to impact the nation this Thursday and Friday with gales, heavy rain and possibly snow behind it.

WeatherWatch.co.nz said the storm will be one of the larger ones on the planet at the time and while the centre of the storm won’t cross New Zealand the rough weather will.

Strong nor’westers are likely to develop ahead of the low on Wednesday and Thursday.

Severe gales are possible across inland Canterbury, Wellington and Wairarapa.

Heavy rain is likely for the entire West Coast and some northern areas such as the Tararua Ranges and Mt Taranaki.

Behind the low is a strong and very cold southerly that taps into the Antarctic region – one of the first times we’ve seen that this year – and may well bring snow to low levels in the South Island on Friday and into the weekend.

However the predictions are currently that the snow will only affect Southland and Otago.

We’ll keep you posted as the week progresses.

Hi team, unrelenting rain / shwrs here in Mamaku-kaimai ranges temp is 9 deg. nw breeze, barom steady at 1021 with dreadful o/cast sky. having a devil of a job here trying to remember what sunny weather feels like. For all the masses out there, the $100 question is… When will we see some sun
Hey phil, for you it was being in the right place at the right time to experience 1st hand the horrors of a severe earthquake…
Cheers