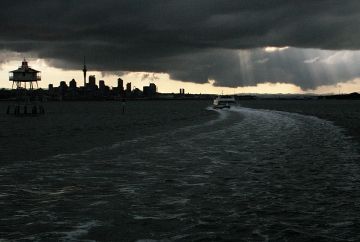 For the final week of August New Zealand will be mostly south of high air pressure, putting us in a westerly flow which will see showers affect much of western New Zealand this week while eastern and northern regions of both islands remain fairly dry and sunny.

Winds will be fairly light for the next few days but on Wednesday strengthening winds will push through southern  areas of both islands – ahead of a cold front which will move in to Otago and Southland on Wednesday afternoon. The cool change will see snow on the ranges and ski fields, but is unlikely to pose any significant risk to livestock.  WeatherWatch.co.nz will continue to monitor but the southerly that is predicted for some places on Wednesday and Thursday isn’t coming from Antarctica, it’s only from the mid Southern Ocean where the air isn’t so cold.

Temperatures will drop in the south – some parts of Southland and Otago won’t make double digits on Thursday – but the cool change won’t last long.

Small hail and heavy showers will move into Canterbury and Wellington overnight Wednesday and into Thursday with south to south west winds.

By Thursday the wind flow turns cool south to south west for many people – but in the north winds may start to develop into an easterly.

In fact, by Friday a strong east to south east flow could be affecting parts of the North Island associated with – you may have already guessed it – our fifth consecutive weekend low.

WeatherWatch.co.nz believes this next weekend low could linger into next week too.

It has really been a mild winter this year apart from the heavy dump of snow at the beginning of the year. We are up in the Rakaia Gorge and we got over a metre in some places. I wonder if we are going to get a big spring dump of snow? It will be interesting see.