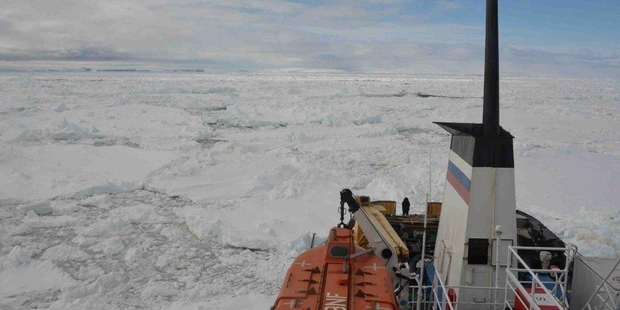 Four New Zealanders are on a stricken ship that spent most of Christmas Day trapped in thick ice in Antarctica.

The ship sent a distress signal to the Australian Maritime Safety Authority after becoming stuck in pack ice about 3,000km southwest of Bluff about 9.30am yesterday.

The area is known for heavy seas and harsh weather.

Three rescue ships with icebreaking capability are on their way to try to free the ship, but will not reach it until tomorrow night at the earliest, said authority spokeswoman Andrea Hayward-Maher.

The 30-year-old vessel is part of the Australasian Antarctic Expedition, a voyage organised by a group of scientists to mark the 100-year anniversary of a similar trip by Australian explorer Sir Douglas Mawson.

The ship left Bluff on December 8 and was due to return early in the New Year.

In a blog post on December 16, Dr Wilson, chairwoman of the Blue Penguin Trust, said the ship was having trouble fighting through pack ice. She also wrote of “big seas” and a breaking swell of up to 5m.

“After all day yesterday pushing through dense pack ice we came to a point where we could go no further, the ice sheet was unbroken and several metres thick. Today has been frustrating, by this afternoon we were only a few kilometres west of where we had been 24 hours previously.”

Colin Tan, a University of Auckland doctoral student, wrote of “confused seas” and seasickness in a blog post just after the ship left Bluff.

“Being at the stern of the ship, this led to me developing seasickness which most of us had that night,” he said. “Not even the mighty Paihia bombs (seasickness meds) kept the queasiness away. Dinner was thus a delicate affair for most of us.”

The ship is in a region that falls under the responsibility of Australian search and rescue authorities.

Maritime NZ spokesman Steve Randle said it was aware of the incident but was not assisting at this stage.

“If there’s any assistance we can provide it’s a case of liaising (with the Australian authority) as the operation is being run through Australia, but we’re obviously there to help if there’s anything we can do.”

Scientists from Australia, Britain, the Netherlands, Argentina and Chile are also on the ship.