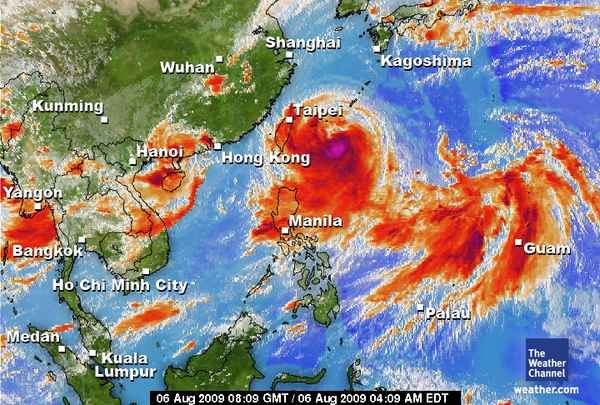 In the eastern Pacific basin, Hurricane Felicia strengthened to a category 4 last night with maximum winds near the center still at 225km/h.  Felicia is located well east of Hilo, Hawaii while continuing to move northwest.

Felicia is forecast to make a turn in a more westerly direction this weekend, while encountering drier air and shearing winds aloft. This will likely quickly weaken the system over the next 3 days. Felicia could reach the Big Island of Hawaii early next week as a weak tropical storm or tropical depression.

At this time it appears impacts to Hawaii will include gusty winds, locally heavy rain and elevated surf.

To the northeast of Felicia, minimal Tropical Storm Enrique continues to weaken while moving northwest.

Outflow from Hurricane Felicia will weaken Enrique to a tropical depression by this evening and a remnant low by Friday. Enrique is not expected to impact any land.

Over in the western Pacific basin, Typhoon Morakot is forecast to continue to strengthen, possibly to category 2 or low-end category 3 status, while moving west. It should move across northern Taiwan Friday and impact coastal China Saturday.

Morakot is a rather large typhoon in size, and its impacts will likely be felt throughout the region.

Tropical storm force winds will be felt for a prolonged period of 1 to 2 days, with much higher damaging winds likely near where the center makes landfall, possibly over northern Taiwan. The combination of torrential rains and high battering waves will bring bring flooding to both coastal and inland areas of Taiwan and then China. Heavy surf and heavy rains are also impacting the southern islands of Japan.

In the western Pacific, Morakot has become a Typhoon and is headed toward northern Taiwan and eastern China with possible impacts.

Being such a large circulation, Morakot will produce large waves (up to 7 metres high) impacting portions of southern Japan and eastern China. The storm is expected to move into mainland China by late week.  The typhoon has winds as high as 213km/h and is expected to strengthen to category 4 status on the Saffir-Simpson scale.

Meanwhile the Atlantic remains unusually quiet with no named storms so far this season.  However forecasters are confident of a tropical storm in the next couple of weeks – which means southern and eastern states of America will soon be preparing for the real hurricane season.

Below – the latest image of Typhoon Morakot.  Image / Weather.com