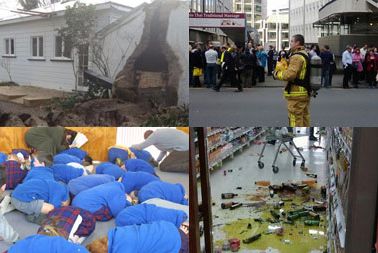 The severe earthquake which rocked the upper South Island and lower North Island Friday afternoon sent workers in Wellington running into the streets as the ground shook and buildings swayed from side to side.

GNS has confirmed the earthquake at 2.31pm was a magnitude 6.6 and was just 8km deep, 3km shallower than the magnitude 6.5 quake which hit the Cook Strait last month.

Friday’s quake was centred just off Seddon at the top of the South Island, causing significant damage to houses and infrastructure in the region.

In Wellington, hundreds of commuters were left stranded, with the rail network crippled and 11 commuter trains stuck between platforms for up to an hour.

The mass exodus from the city also caused traffic chaos in the suburbs as drivers tried to avoid the motorway and get home via back streets.

One driver, Nick Payton, said traffic around Wilton and Northland had come to a standstill.

The New Zealand Transport Agency (NZTA) said pedestrians stranded in the city were walking along the motorway between Wellington and Petone.

“The roads are busy as people are choosing to leave the city centre and the Hutt and head home so please be patient with your fellow road users and allow extra time for travel,” said NZTA state highway manager Rod James

Damage appeared to be restricted to the Manners Mall, Cuba St and Featherstone St areas of the CBD where there is broken glass on the roads.

Irene Walker, operations specialist in the Telecom building was unable to get home to Waikanae.

“I’m in the Telecom building on Willis St. It was really swaying. We stayed for a while but the nerves get the better of you.”

“But I feel safe here in the greenery (outside the train station) rather than being stuck in a building.”

The upper South Island felt the full force of the earthquake, with homes in Marlborough seriously damaged.

Laura-Jean Kerslake was asleep when the quake struck and had to run from her crumbling heritage home in Seddon.

The 1874 cottage, where she lives with her parents and infant son, partially collapsed in the tremor.

Ms Kerslake said everyone else was out of the house and she managed to get out without being hit by falling debris.

“It was terrifying,” she said

Seddon fire chief Kevin Hebberd said fallen power lines had caused a grass fire, and the town’s fuel supply had been ripped out of the ground.

The Fire Service was doing a street-by-street check on everyone it could.

The first quake lasted for two or three minutes, and aftershocks were still rattling the station every few minutes.

“It’s the strongest one we’ve had and it’s still continuing,” he said.

GNS seismologist Anna Kaiser said an earthquake of this magnitude was never ruled out as a possibility, but it “wasn’t the most likely scenario by any means”.

“Just on Monday we had calculated that the probability of a magnitude 6 or greater earthquake in the next week was 2.3 per cent, and in the next year it was 19 per cent,” she said.

It was certainly the most significant shake Wellington had experienced in recent decades.

Ms Kaiser said the latest earthquake meant there was an increased possibility of further large quakes.

Geonet figures show there have been 60 aftershocks since this afternoon’s magnitude 6.6 quake.

Six have been magnitude 5 or greater.

A nine-storey lift shaft attached to the James Smith’s parking building is to be demolished urgently, possibly starting tonight due to the danger of it toppling after today’s large quake.

Lukes Lane, between Taranaki Street and Manners Street, had been closed to the public following an inspection of the structure, Wellington City Council said.

Wellington City Civil Defence Controller Stavros Michael said council inspectors and the police would use `dangerous building’ provisions of the Building Act to require the evacuation of buildings immediately surrounding the lift shaft.

“In the days after the 21 July quake we asked people in the area to voluntarily evacuate until temporary repairs on the lift shaft were completed.

“This time, however, the risk of collapse is such that we can not take any chances. We will order people to leave the building until work is done to make the area safe,” he said.

The council is making arrangements with contractors to start the demolition as quickly as possible either tonight or tomorrow morning.

Council welfare staff were on hand to offer temporary accommodation to evacuees if required.

Mayor Celia Wade-Brown said there have been initial reports of some superficial damage to buildings in the CBD but there had been no reports of any major damage so far, nor injuries