Severe frosts on the way 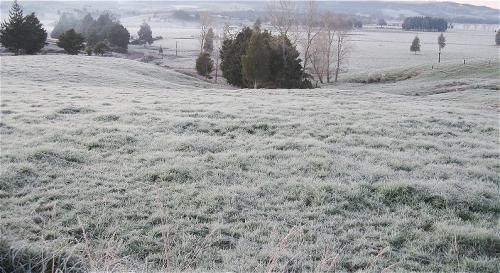 It looks as though conditions are going to be perfect for severe frosts across inland parts of both islands with heavy frosts stretching as far as the coasts and northern New Zealand.

A large high in the Tasman Sea will begin to spread over the South Island starting tomorrow and lasting for a number of days.  Some showers may skirt the outside of this high along with breezy south easterlies which could impact Northland, Auckland, East Cape and Hawkes Bay.

For now the high is going to spread over the South Island this weekend and following the recent blast of polar air severe frosts are highly likely about Central Otago.  Temperatures may plummet well below -5 across inland parts of the South Island and around -2 or -3 for many other centres as far north as Taupo and parts of Waikato.

The south easterlies may stop frosts from forming in Auckland although a frost is possible tomorrow.

We’ll have a better understanding of how Auckland will be affected by this high over the South Island and how severe frosts will be from Waikato southwards later today.