Settled weather to continue for NZ 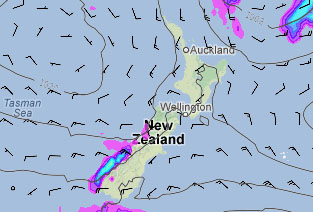 Tomorrow is looking to be another settled day although there will be a few differences from today, perhaps a little more wind in some regions.

For the North Island expect mostly sunny weather again with light winds. In the west however from Taranaki through to Northland southwesterly breezes will pick up during the morning and become a little breezy during the afternoon, there will likely be a few areas of cloud at times also. The warmest temperatures tomorrow will be about eastern parts of the island getting into the mid 20’s in Hawkes Bay and Gisborne.

In the South Island cloud will push north up the West Coast during the day, showers in Fiordland then in the afternoon the odd drib or drab may move into North Westland. The east coast will be largely settled from Canterbury through to Nelson with temperatures in the mid 20’s, winds will also be light. Otago and Southland will have west to southwest breezes so a little cooler.

Thursday sees a similar pattern for the North Island, the lightest winds and warmest temperatures will be along the coastline of eastern regions. There is a chance of some cloud and the odd light shower in the west from Taranaki through to Auckland later in the day. In the South Island a northwesterly airflow picks up a bit so rain on the West Coast and warm temperatures with high cloud out east is on the cards.

wow the moon is a nice bright orange colour tonight..almost red..any ideas why?

A cool southerly came through here from after noon which dropped the temperature a little.
Interesting to see the maximums for the next couple of days here in West Melton.