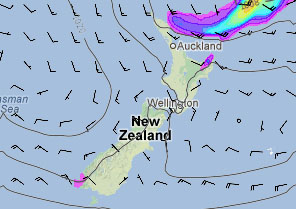 An anticyclone sitting in the Tasman Sea is largely set to give us some settled weather for most of New Zealand this week.

From Wednesday some cloud and the odd shower will move onto the West Coast of the South Island however which turns to rain later on Thursday. On Friday this anticyclone will start to slip over the top of the North Island and a westerly airflow will start to get established over the country so perhaps later in the weekend or early next week we may start to get some unsettled weather come through.

For now though tomorrow is looking like a cracker of a day for most around New Zealand. There could be an early shower about eastern Northland however they will clear and westerlies may be a bit breezy on the West Coast of the South Island but apart from that expect light winds and afternoon sea breezes elsewhere.

Expect temperatures to be in the low 20’s across the North Island tomorrow although high teen temperatures may only be reached about Hawkes Bay and Gisborne due to an afternoon sea breeze from the northeast.

High teen temperatures are likely across most of the South Island also perhaps peaking in the early 20’s before afternoon sea breezes kick in in coastal areas. In the likes of Alexandra and Marlborough expect high’s of around 22 to 25 degrees however with lighter winds for most of the day.