Home > News > Settled but cloudy in some regions...

Settled but cloudy in some regions 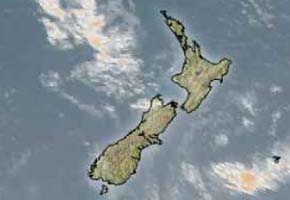 It’s quite settled over New Zealand today however there is also a lot of cloud about, partly due to moisture that is hanging around having been left from a low now out to our east. As a result of this moisture it’s quite foggy particularly in Canterbury, in Christchurch the fog has managed to lift a little so far so now we’ll call it a cloudy sky. Hopefully a few sunny breaks peel through this afternoon, by evening the fog will more then likely lower back down so if you flying out from the airport tomorrow here or flying in keep an eye on conditions.

It’s not all cloudy everywhere though, parts of Otago, the West Coast of the South Island, Hawkes Bay, Gisborne and Northland have mostly sunny skies right now. The temperature in Northland is hitting 18 degrees currently making it the warmest in the country today. Southland even being as far south as it is, is not doing badly right now. Invercargill is on 14 degrees. The coldest temperatures last night went to parts of Central Otago which were around –1.

Winds are generally light tending southwesterly in the South Island, west to southwesterly winds in the North Island are a little breezier but still not too bad.

‘Southland even being as far south as it is, is not doing badly right now’

Lol, we’ve been doing a tad better than a lot of the SI lately….

You’ve got that right LM, it has been better weather in Southland lately. Maybe the weather pattern might return to a more normal pattern mid next week, heavy west coast rain etc instead of on the east coast.