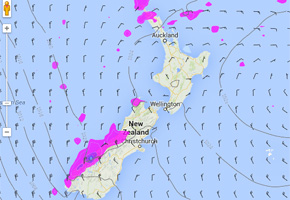 This coming week flares up a little early on with a front moving northwards over the country today then calms down on Tuesday and Wednesday under the influence of an anticyclone. Thursday and Friday sees a northerly airflow lie over the country, northeastern parts of the North Island and most western regions see cloudy periods and a few showers, dry for most out east with warm temperatures.

For todayâ€™s weather check out this mornings national
forecast here

On Tuesday conditions are mostly sunny across the country with light winds as a large anticyclone covers the country, cloud a little more frequent about the Bay
Of Plenty / Auckland northwards. Northland sees the odd light shower at times especially in the east. The West Coast of the South Island may see a drizzle spell or two also.

The anticyclone doesnâ€™t hang around for long moving eastwards on Wednesday, similar conditions over the North Island as on Tuesday. The South Island sees a northerly airflow pick up a little, the only difference from Tuesday is drizzle patches are more likely on the West Coast during the day.

Northerlies spread over the whole country on Thursday. Eastern regions of both islands will likely be mostly sunny with some high cloud, warm temperatures too with highs in the late teens. About Northland and down through
to the Central North Island expect cloudy periods, the odd light shower can be expected. The West Coast of the South Island sees patchy showers for much of the day.

Warm again for eastern regions on Friday with a north to northwesterly airflow. Expect cloudy spells for much of the upper North Island bringing occasional patchy showers, winds from the east or northeast. The West Coast of the South Island sees some rain.