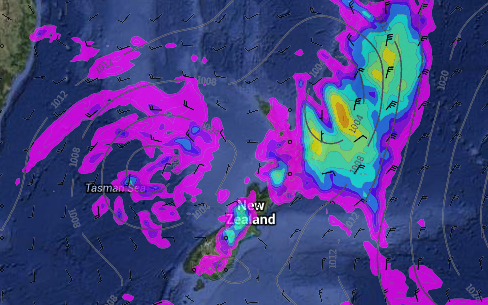 Towards the end of February WeatherWatch.co.nz forecasters labelled the first half of March as becoming quite dry in many areas again, while the second half of the month looked like it may be more ‘subtropical’.

Now that we’ve reached the halfway point of March that forecast remains the same – and while a brief southerly may affect Southerners over the next day or so, the wind flow in many areas will be east to north east in the coming week.

SOME AREAS VERY DRY, WANT RAIN
The lower North Island and eastern South Island are now the driest parts of New Zealand and sub-tropical air flows don’t always favour rain in these areas.  With the current southerly moving northwards we can expect drizzle and patchy light rain to form around the Lower North Island tonight and into Wednesday.  Sometimes it can be a fine line between light drizzle and more set in patchy rain – latest data suggests a 70% chance of light rain for Wairarapa on Wednesday.

On Thursday winds turn more nor’east and sub-tropical air starts to move down across the nation – but with a large high just south of Wairarapa it makes rain tricky to get into the lower North Island. On Friday this high will be east of Wairarapa and expanding in size – in other words, pushing back into the lower North Island to block rain makers.

The next chance for rain in the dry lower North Island and eastern South Island may be next week (Between Monday and Thursday with perhaps Wednesday the best chance) – but it depends on a low that may (or may not) form near East Cape and then slide rain (in an easterly flow) down the entire nation’s east coast.  This would be a fantastic set up for many people – but our confidence levels aren’t especially high for this to happen just yet. We’ll need a couple more days to lock in more data.

COLD WEDNESDAY FOR SOME – BUT WARM RETURNS
With a cool southerly change today it means that places like Christchurch will only get to 12 degrees at the warmest point on Wednesday. Ashburton and Timaru may only reach 11 degrees at the warmest part of the day too. But the warmth comes tumbling down NZ later this week – and Canterbury will be back into the mid 20s by this weekend.

Wellington also has a wet and cold Wednesday on the way, with drizzle and patchy light rain in the area and a high of 14. Thursday may not be hugely different either with the southerly falling apart as it moves into the lower North Island.

Next weekend – not this one coming up but the one 10 days away – may see a return to more traditional Autumn weather, with cold fronts bringing rain to western NZ (including dry central areas like Kapiti, Horowhenua, Manawatu and Wanganui) with warm nor’westers ahead of the front and cooler, windier, west to south west winds behind it.

PLENTY OF SUN OR DRY
Sub-tropical air tends to make us think of downpours, thunder and very high humidity – but because we’ll have a big high near the eastern coastline it may create a hot dry flow in many areas this week.  So yes, some downpours, some drizzle – but plenty of areas of dry.   There doesn’t appear to be any ‘wet day’ for the entire country – with lots of localised areas of rain, heavy showers.  We’ll do our best to track the rainmakers in advance – and which regions will be most effected.

– Image / One week from now, midnight next Tuesday March 22nd shows a *potential* weak low near East Cape. One to watch for those who need rain. Image / WEATHEMAP