Home > News > Second burst of wind and rain for Wednes...

Second burst of wind and rain for Wednesday/Thursday 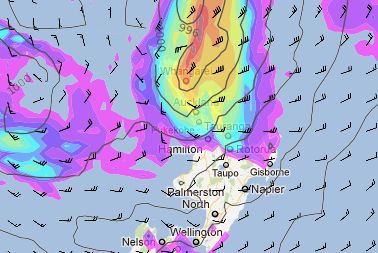 The sub-tropical low which has stalled over Northland will tomorrow help create a secondary low north of the country which will then rapidly cross the upper North Island on Wednesday night bringing torrential rain and possible gales.

WeatherWatch.co.nz says the type of rain band moving in will be different to Monday’s slow moving one – instead this one is likely to rocket across the upper North Island in about 12 hours – with the worst of the wind and rain likely withing 6 hours.  It’s likely to then slow down but weaken.

“This secondary low will be small but sharp and could bring in a period of torrential rain and gusty to gale force nor’easters from Bay of Plenty northwards” says head weather analyst Philip Duncan.

“There is potential for slips and flash flooding with this next spell of severe weather along with isolated power cuts due to slips or small branches taking out powerlines”.

“These lows are acting like cogs by working together to pull down moisture rich sub-tropical air”.

Mr Duncan says by Friday the nation will have a breather before a Southern Ocean low churns by south of New Zealand bringing a change to strong westerlies.

In the NZ Herald you state that Northland is going to get dumped on again tomorrow. Yet Metservice has no such warning and its 3 day weather forecast map for 7pm Wednesday shows no rain but the 7 day weather forecast map for the same time shows a low centred on Northland. Further, Metservice’s weather outlook warning says confidence is low for heavy rain plus their forecast for towns in Northland is similar. Who and/or what is right here?

BTW. Wekaweka, east of Waimamaku, got exactly 200mm of rain out of the first bout.

Hi WW,
What are the chances of this next system “bombing out” and blasting us from a different direction in Taranaki ?

Hi Mike – it may deepen quite quickly… so we’re keeping a close eye on it.  The latest data, however, does suggest that the low will weaken before it hits Taranaki – so we’ll be watching it very closely in about 24 hours time from now.  But at this stage, we’re hoping you’ll only get some rain and brisk winds.

Brisk, to us, means quite strong, but not enough to cause widespread damage – maybe a few rubbish bins blown over etc. 🙂  More annoying than damaging (or great if you’re into kite surfing!)

I am tired of all the wind now,enough of the pine needles now the leaves are falling everywhere and will go on 3 months and really sick of getting the broom out day after day.

The ‘nation’ will have a breather? This appears to have been a North Island event.