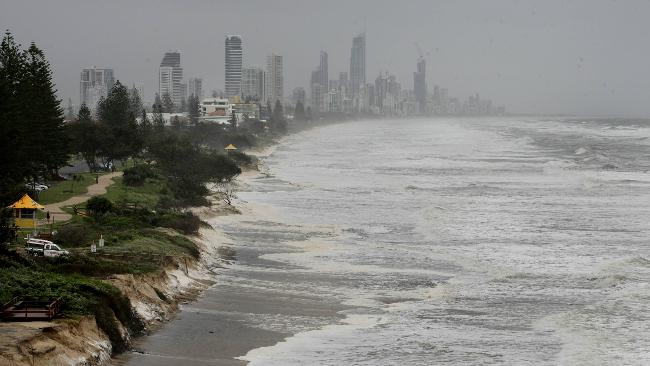 Across the Tasman it’s not looking pretty as we approach the weekend for parts of the Gold Coast and Brisbane as big clouds get set to roll in.

Rain and thunderstorms look like bringing the biggest falls since mid-winter, for some the biggest since autumn.

Between now and Sunday rainfall will generally be in the order of 30-to-50mm with potential for 100mm.

The heaviest rain and storms are likely to be inland, in places such the Darling Downs, the Gold Coast hinterland and western suburbs of Brisbane.

For much of the coast this will be welcome rain, given the recent long dry spell.

Many places will gain more rain in 24 hours than they have in the previous three months.

August, September and October only delivered 27mm of rain to Brisbane, almost 150mm short of the long-term average. This made it the city’s driest three consecutive months in 18 years. In the winter of 1994, Brisbane only received 25mm.

A slow-moving low pressure trough is filling up with tropical moisture, causing rain and storms from the Top End to NSW. This trough is inching across western, central and southern Queensland, taking high humidity, rain and storms with it.

The most concerning part of this rainfall will be the intensity of some of the storms. Flash flooding is likely and damaging winds are possible. Large hail is only a slight risk.

For Brisbane, most of the rain will be on Saturday, which will interrupt the First Test at the Gabba. As much as a session or two may be lost.

Skies will clear during Sunday, making it the driest and brightest day of the next few. However, southeasterly winds will be fairly cool.

It should then stay dry until mid-week, allowing plenty of time for lost play to be made up at the Gabba.