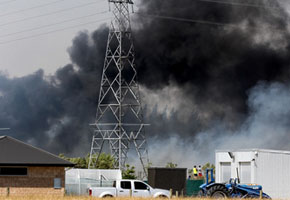 Four houses have been engulfed and destroyed and people are being evacuated as a large fire burns out of control south of Christchurch.

Stock are being moved as the blaze sweeps through an area near Prebbleton and Lincoln, and roads have been blocked to stop traffic entering the area.

Ten people have been rescued in a “snap rescue” at a fire on Shands Rd.

“They got in fast and got out fast” he said.

There are two fires blazing in the same area: one on Shands Rd and one on Selwyn Rd.

Resident Amy Throsby, 20, was fearing the worst after she saw her home engulfed in black smoke.

About 10 fire trucks attended a blaze on Selwyn Rd about 3pm today.

Ms Throsby believed the fire started in a quarry behind her property and spread to a neighbouring chicken farm.

“We live next to the chicken farm and I could see black smoke behind our property. It just went up from there.”

She said she grabbed her dog and fled in her car. “The wind is not helping at all.”

Ms Throsby said she believed five houses are threatened by the blaze.

“The fire was out on the road on the grass-front.”

Her mother, Bev Throsby, said: “It’s so dry, it’s all rural around here.”

Mrs Throsby had been trying to contact the owners of the chicken farm.

“They’ve just gone away on holiday today,” she said. “We didn’t manage to get their dog. We don’t know where he is.”

Homepage image / Smoke billows from a scrub fire in Shands Road in the Pembleton area of Christchurch. Photo / Martin Hunter