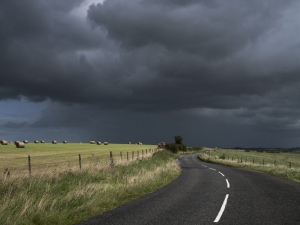 It looks to be a fairly unsettled day for many parts of the country to finish off the month of March.

It’s been a dry month overall once more and as we’re on the eve of a new month could it be showing us that things are on the change overall? The answer is quite possibly yes.

The weather pattern at the moment isn’t seeing the highs as the main billing and fronts and depressions are working their magic a little more and more consistently nearer to New Zealand.

We can’t expect the rain all at once everywhere but today shows what we here at WeatherWatch have thought for some time now and that’s handfuls of showers or patchy/spotty rain could provide a little relief bit by bit.

What has been difficult this long weekend is the amount of showers that have peppered parts of the upper north of the North Island and their early arrival.
“It’s not that it’s necessarily disappointing but the northerly airflow has contained patchy showers rather than totally dry conditions” says Weather Analyst Richard Green – “and today sees more of that taking hold and delivering a bits and pieces day”.

A front is expected to cross the country today with an area of low pressure attached to it and this is where we see precipitation sliding over the nation.

Most of the activity this morning is showery in spots over the South Island and moderate falls of rain about the West Coast and inland areas have also been reported.
Over the North Island the Coromandel has seen some rain but elsewhere it’s just a few showers to speak of in Northland, BOP, Wanganui and even a light shower across Gisborne.

Winds will blow in between north and west for much of the nation and perhaps a little stronger in the south which will see mild to warm temperatures on the lee side of the Alps later today.

“Dust could be an issue over areas of the Canterbury Plains” according to Richard Green. “We’ve seen it quite a bit in recent times and when the wind rises so does the dust – not only in Christchurch with the rebuild process but also in outlying rural areas with the big dry rolling on”.

WeatherWatch believes much of the North Island is in a similar situation with the drought ongoing but hopefully today areas of showers should see that dust settle for a short time.