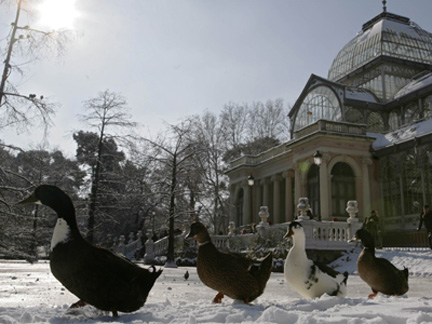 Millions of people in northern Europe are still battling snow and ice, wondering why they are being punished with bitter cold when — officially — spring has arrived and Earth is in the grip of global warming.

Yet some scientists, eyeing the fourth year in a row of exceptionally harsh late-winter weather in parts of Europe and North America, suggest warming is precisely the problem.
In a complex tango between ocean and atmosphere, warming is causing icy polar air to be displaced southwards, they contend.

“The linkage is becoming clearer and clearer, I think, although the science has not yet been settled,” said Dim Coumou of the Potsdam Institute for Climate Impact Research (PIK) near Berlin. The theory derives from a long-studied Arctic phenomenon called a positive feedback — in plain words, a vicious circle.
Rising temperatures are melting the Arctic’s floating cap of sea ice, especially in summer. In 1979, when satellite measurements began, summer ice covered some seven million square kilometres), roughly equivalent to 90 percent the area of Australia.

In September 2012, summer ice hit its lowest extent on record, at just 3.4 million sq. kms. Take away reflective ice, and you have a dark sea that absorbs solar radiation, which in turn reinforces the melting, and so on. But the theory suggests the added heat, stored over a vast area of surface water, is also gradually released into the atmosphere during the Arctic autumn. It increases air pressure and moisture in the Arctic, reducing the temperature differential with lower latitudes.
Here’s what happens next: The polar vortex, a powerful circular wind that essentially pens Arctic air to the roof of the world, begins to weaken. Finding itself released, a mass of moist cold air spills southward, bringing snow and chill down into North America and Europe. And it tends to stay there, because of what happens to the jet stream.

Instead of encircling the northern hemisphere in a sturdy and predictable fashion, this high-altitude wind takes a lazy looping path, zigzagging over the United States, the Atlantic and Europe. The southern parts of the loops get a bout of cold weather that becomes stalled in place.
“Heat that is stored in the (Arctic) ocean can rapidly transfer to the atmosphere, and this affects the dynamics” of northern hemisphere weather patterns, said Coumou in a phone interview. “We’ve had a couple of winters (in Europe) where you’ve had rather shorter-term cold spells, of a duration of maybe 10, 20, 30 days… It’s been the same in the continental US and Canada where they’ve seen similar quite bizarre cold spells but of a relatively shorter period.”

Please explain conflicting reports from NASA, Hadley Climate Research Unit, and others which agree that there has been no detectible global temperature-increase for over 16 years even as atmospheric CO2 has increased 10%.

Regardless of whether you believe in global warming or not, only an idiot would fail to see that, as a species, us human beings are “breaking” our world at an alarming rate – already there are too many of us, the population is rapidly increasing, and we consume everything !!! This cannot continue and at some point, the world will not be able to sustain us any longer.

Unfortunately, there is no solution as we are not enlightened enough to give up our current way of life and our conveniences – even if these very same conveniences will eventually result in us wiping ourselves out.

As such, human kind’s only hope of surviving hinges on technology. Hopefully the scientists will come up with a solution that allows us to inhabit our planets before we eventually destroy our current home – earth !!!